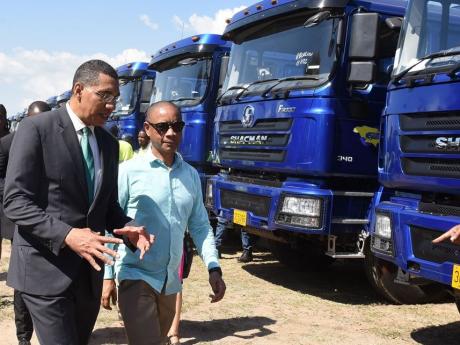 Prime Minister Andrew Holness (left) with Dennis Chung, Chairman of the National Solid Waste Management Authority (NSWMA), at the handing over of new garbage trucks to the agency on November 30, 2022. – Ian Allen photo.

While not divulging the locations, Holness indicated that the plants will revolutionise how Jamaicans dispose of waste.

Waste-to-energy plants burn municipal solid waste to produce steam in a boiler that is used to generate electricity.

Currently, Jamaica generates an estimated 1.4 million tonnes of garbage annually, the vast majority of which is dumped or buried at one of the eight landfills across the country.

"Very soon the plastic bottle that you throw through the window will become very valuable in the production of energy,” he added.

Holness was speaking at the handing over ceremony of 50 garbage trucks to the National Solid Waste Management Authority (NSWMA).

He said the trucks will bolster Jamaica's garbage collection, which costs US$6.9 million.

Holness also noted that the construction of waste-to-energy plants will be done under a public-private partnership.

In 2016, he appointed a nine-member enterprise team to identify a preferred waste management provider for the divestment of the Riverton Landfill.

This would also include establishing a waste-to-energy system in Jamaica.

The Prime Minister said the work of the enterprise team is almost done and that a submission will be brought before Cabinet early next year.

Among the expected recommendations will be how Cabinet can divest garbage collection to private companies.

“It is not optimum to carry out Jamaica's waste management in its current form, the service provider is also the regulator,” he said.

“So NSWMA ends up spending more time and effort trying to provide the service, the service is not always at the standard, so the NSWMA is in an invidious, in fact, a compromise position because it can't regulate and enforce on itself, for service that is not up to standard.”