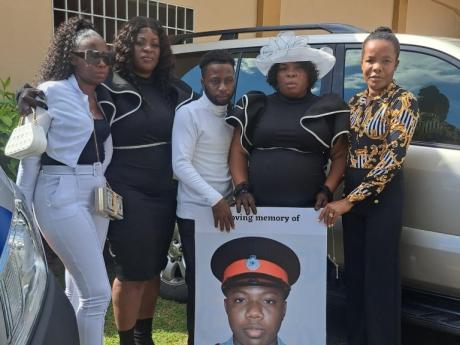 "One thing for certain Constable Brian Martin Jr was definitely a chip off the old block, in Jamaican terms, he was not a jacket."

Those were the opening lines from Malcolm Martin as he remembered his younger sibling who died on October 18 after being shot at a wake on Rickets Avenue in St Andrew on October 15.

In a sombre thanksgiving held at the Kencot Christian Church in Kingston on Saturday, attended by family members including his mother and father, senior police officers, friends, and well-wishers, the elder sibling humanised his brother pointing out that he got every physical trait from their father except his nose which he said he got from his mother.

"Brian was a gifted child, a quiet child, a stubborn child, a determined child, and a smart child. He was very respectful, I don't think you can find anyone who would say Brian disrespected them," he said.

He remarked that his late sibling became a new person after meeting his girlfriend, Kijana Allen.

He described the glee and excitement the late Martin Jr. exhibited that February when they met, and even though it was a long-distance relationship, how they made it work.

The elder Martin remembered how he urged him to meet his new found love, which he did on video chat and introduced himself to her.

"I said to myself after meeting her how he got such a pretty girl, but after I thought about it I recall that we the Martins are blessed from head-to-toe and in the centre. I was able to figure out what she saw; she saw something that most women see - a good man."

Marlon Nesbeth, Senior Superintendent in charge of the St Andrew Central Police division, in which the Half-Way Tree Police Station is located, where Martin Jr was stationed at the time of his death, in eulogising him, said he was a symbol of strength and virtue, the pillars on which to build a Jamaica Constabulary Force (JCF) career.

Nesbeth said after he left Norman Manley High School with some CSEC subjects, he was determined to acquire more, so he continued his education at the Excelsior Community College where he was successful in additional CSEC and CAPE subjects.

According to the senior officer, Martin Jr. enlisted in the JCF in August 2021 and was fully aware of the immense responsibilities and possible consequences of being a crime fighter.

He said three persons have been implicated in the shooting death of the late constable, with one deceased after engaging lawmen in a shootout, and two have been arrested and charged.

Meanwhile, Commissioner of Police Major Anthony Anderson, in a written tribute contained in the funeral program, said the passing of Martin Jr has cut short his contribution to the collective effort of JCF in the fight against crime.

Anderson expressed deep sorrow to the bereaved family for their loss.

Martin Jr is the third of eight children for Williams to have died.

Her eldest son was shot and killed and her only daughter died from an illness in 2019.