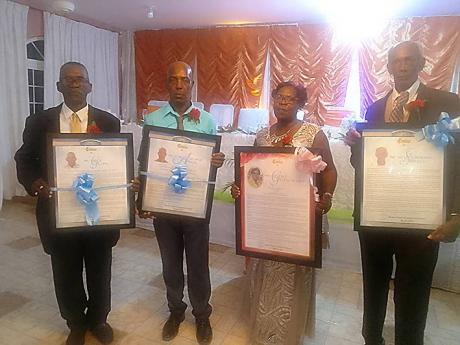 Four retired employees at Bethel Primary School, in Hopewell, Hanover, who, together, have given a total of 92 years of service to the education sector, were lauded by the board of management and administration of the school on Thursday, December 1.

At a retirees dinner, held at the Chateau Margarita Hotel and Restaurant, in Unity Hall, St. James, the four, Beverly Gilling-Williams, former vice principal; Wesley Samuels, former groundsman; Errol Gilling and Clifton Anglin, both former security officers at the school, where presented with plaques bearing citations, and cheques courtesy of the school.

Gilling-Williams served the institution in various capacities in the field of teaching, for 34 years, and retired as the vice principal. Samuels worked for 18 years, while Gilling and Anglin served for 16 and 24 years, respectively. They all retired in the 2021-2022 school year.

The citations, read by different grade teachers from the Bethel Primary School, which goes by the moniker, ‘The Home of Champions’, highlighted the dedication, commitment, professionalism and diligent service which was given by them in their respective areas of service at the school. Pre-recorded messages of appreciation, from groups of students who experienced their love and attention during their tour of duty at the school, were also aired at the function.

Education officer in the Ministry of Education Youth and Information Region 4, Yvonne Ward-Hardie, who was present at the function, noted that while serving the education system can be a challenging task, their service to education is one of the greatest gifts that all four awardees could have given to their country.

“It was never about the remuneration, but rather the personal gratification that one gets from the selfless service knowing that you were impacting lives in a positive way, and shaping the destiny of many,” she stated.

“You have all made sterling contributions to the education sector, and for this I know that the ministry of Education, the students with which you interacted, and their parents are eternally grateful,” she noted.

She argued that giving thanks to someone posthumously does not have the same impact as when they can be looked in the face while appreciation is being shown, and, as such, congratulated the Bethel Primary School family for showing their appreciation for the four retirees.

“Over the years you have put great efforts in instilling tolerance, kindness and patience on to the future generations, you have all worked tirelessly, and I hope that the knowledge and skills other have gained from you will be used well in building this great nation,” The region 4 Education Officer stated.

Principal of the school, Jasmin Beckford-Johnson, and chairman of the board of governors, Kadian Ellis, also praised the former employees for their years of committed and loyal service, noting that the students who were under their guidance and experienced their love over the years helped them to be better people.