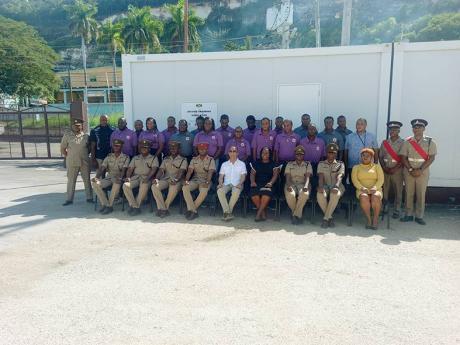 Dr Horace Chang, minister of national security, says the government is working to use, among other training institutions, the Caribbean Military Technical Training Institute (CMTTI) to remove the stigma and the burden placed on young people who are being refused employment because of where they live.

“You will find when I visit these communities one of their great distress is, if they put Canterbury or Glendevon on their application form, they (human resources officers) will give your a nice smile, and say, yes, you will hear from me because you look like a nice young man or young woman, but by the time they leave the room that file goes to file 13, and the secretary is told to look for more applications,” said Chang.

He said it was the government’s hope and desire to bring an end to the hurdle through education and specialised skills.

“What we are hoping to do is that by taking you through this programme where you can say trained at the Caribbean Military Technical Institute so that these persons will take a second look and call Major McDonald or just invite you in for an interview and discuss with you, who you are, the skills you have and offer you that job,” the national security minister said.

Chang said when the Articulated Truck Driving Course started, he had hoped that CMTTI would not take on the responsibility in providing job placement for graduates because “overcoming the challenges you face ... the social challenges remain, the legacy remains”.

He said that the stigma was such that even recommendations for people living in under-resourced communities pose a challenge sometimes. However, he shared that those hurdles, though seemed entrenched, are being overcome.

“We have inherited a country where we literally stigmatised an entire community, unfortunately. We are fighting that. And as we broaden our youth engagement programme, I am confident that once we get there I know we will overcome the activities that we have, which is the crime and the violence that beset our community,” Chang said.

Outside of being stigmatised because of where they live, Chang who is the member of parliament for St. James North Western, which includes the communities of Glendevon and Norwood, said nobody who was in a position to elevate these young people were given a listening ear.

“There are a couple of things they suffer from in these communities, one, nobody listens to them; secondly, they don’t get the respect they are due as individuals, which is why they have to assert themselves aggressively to gain some respect, and if not respect, fear, and then they are not offered the opportunity,” said Chang.

He noted that steps were being taken to embrace all Jamaicans youths amid the communities they call home.

“This government is setting out to respond to them because we hear their cry for opportunities. Whether they are from Canterbury, Southside or they are from Arnett Gardens, the majority I will say are young men and women who are looking for opportunities and the government is committed to answer that call by a much-more-widespread youth engagement,” the national security minister said.

Further, Chang has given assurance that his government is ensuring that “our young men, especially those who are currently leaving high school, will have the opportunity to acquire skills and social habits to make them productive and good employees”.