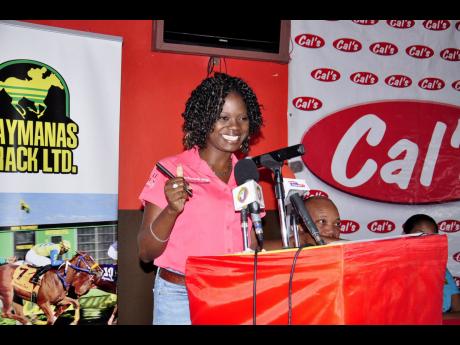 Cal's Manufacturing Limited has taken up the mantle to be this year's official title sponsor of Jamaica's biggest Horseracing event, the Jamaica Derby, slated to gallop on Saturday, June 13, at Caymanas Park in Portmore, St Catherine.

The 95th edition of Cal's Jamaica Derby will see Cal's Manufacturing injecting a total of $4 million - $1.5m towards the purse and the other $2.5m to promote the event. Cal's initial sponsorship of the Jamaica Derby started in 2011.

Sabrina Thomas, marketing manager, Cal's Manufacturing, said the reason behind sponsoring the Jamaica Derby is because it is the biggest raceday on the horseracing calendar.

"There will be a 10-week promotion that will highlight our various products, which will help to build up the excitement and energy leading up to Derby day," Thomas said.

She explained that their 'Derby Watch' is to create awareness among the horseracing fans and the general public on a whole, adding her desire for Jamaicans to recognise their sponsorship in the most famous Jamaica Derby.

On the day of the Derby, there will be lots of activities put on by Cal's.

Thomas further explained that persons can earn big from the Spin-the-Wheel competition. They would write their name on their ticket and drop it in a box provided in the three different stands. There will be a draw and three lucky patrons will win a 32-inch flat-screen television.

Thomas also mentioned that there will be sampling of their products such as Cal's mackerel, soup and syrup.

"We are using the opportunity and this medium to showcase our new products like Cal's mackerel, Cal's coconut milk powder and corned beef," Thomas outlined, noting that they will be using Off-Track Betting locations across the island to sensitise the horseracing public about their products and services leading up to the Jamaica Derby, by using crawlers at the bottom of TV screens to advertise their brand.