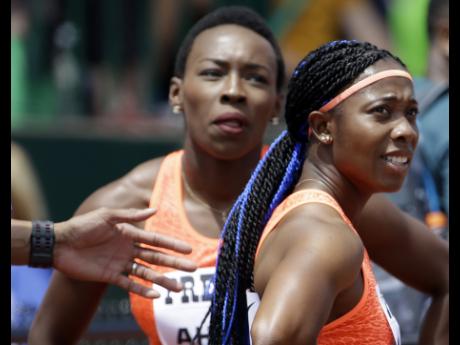 AP photo
Sprinters Shelly-Ann Fraser-Price (right) and Murielle Ahoure look to the scoreboard after they tied for first in the 100-meter race during the Prefontaine Classic track and field meet in Eugene today.

Olympic and World 100m champion Shelly-Ann Fraser-Pryce won the women’s 100m in a world leading 10.81 seconds to score the only Jamaican win at the Prefontaine Classic at Hayward Field, University of Oregon, today.

Running in her second 100m this season in a headwind of 1.7 metres per second, Fraser-Pryce made an excellent start and battled from mid-race to the finish line with Ivorian Murielle Ahoure, with whom she crossed the line almost simultaneously to record the same time.

Commenting on the world lead, she added: “It’s good, but it’s still early in the season, you just have to trust God and trust the process.”

American Tori Bowie flew in the last 30 metres to finish half-a-step behind in third, clocking 10.82, with Nigeria’s Blessing Okagbare fourth in 10.87 and Carmelita Jeter of the US fifth in 11.02.

Trinidad and Tobago’s Michelle Lee Ahye pulled up in the last 20 metres.

Elaine Thompson added some more stars to her glowing advancement this season, even as she placed second in the Women’s 100 metres.

The Jamaica ran a big personal best 10.84 seconds to finish second alongside American English Gardner, separated only by the camera at the finish line.

Thompson was slowly out of the blocks, but picked up the pace by mid-race, stayed composed and just got breasted by Gardner in a blanket finish, with the rest of the field well beaten.

Brazilian Rosangela Olive was third in 11.04, with Jeneba Tarmoh fourth in 11.06.

“It’s a big PB, I’m grateful, I have to thank God. Training is hard and it really showed on the track,” said Thompson. “it was a pretty good race, I finished healthy and I’m happy.”

Meanwhile, Stephenie McPherson was the best placed among the Jamaican women’s trio in the 400 metres, placing third in a season best 50.40 seconds.

Running out of lane five, the Jamaican ran a steady race and came into the homestretch a couple metres behind leader Felix and Richards-Ross making a strong move.

However, Felix, who ran hard over the first 150 and eased down before stepping up the past in the last 150, showed good form and strength to pull through for the win.

McPherson closed like a train down the straight and came within a stride of Richards-Ross, but never had enough power left to push past the American.

myReport Assignment: Send us your photos, videos and stories. www.jamaica-gleaner.com/myReport ... See it, snap it, share it!