Man for the big moment 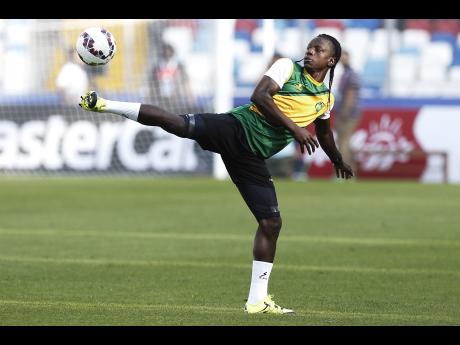 DARREN MATTOCKS reckons he’s a man for the big moment.

As a schoolboy, he did it for Bridgeport High to lift the Manning Cup title.

Year-end at the regional championship, he scored one goal in Jamaica’s victory to lift the Caribbean title.

At the CONCACAF Gold Cup, and Copa America he had gone goalless for a total of seven matches.

Then came Wednesday’s semi-final against hosts United States and the super confident striker hits the mark, handing the Reggae Boyz a lead they stretched through Giles Barnes’ goal to emerge 2-1 victors.

“Perfect timing. They always say big players step up when it matters most. I think it was perfect timing to beat America in America in the semi-final. It’s just spectacular, it’s just perfect timing heading into the final. Hopefully we can get a goal or two and take it home,” he said of Jamaica’s historic win, their first over the Americans in their country.

“I think I’ve got luck on my side when I play against America. I’ve played against them three times and I’ve beaten them twice,” he admitted. “But to beat them in America in a Gold Cup semi-final speaks volumes where Jamaica’s football has been and is going because we had never done that before. That’s something that’s going to be in history forever, no one can take that from us.”

It has also given the Jamaicans another bite at history, as it’s the first time they have qualified for the Gold Cup final, being the only Caribbean team to do so.

On Sunday evening when they tackle six-time winners Mexico in the final, Mattocks, who carefully pointed out that the team’s goals come first, says they’re optimistic, but respectful.

In terms of his own form, the striker didn’t see himself as struggling before hitting the US target with a 31st minute header off Kemar Lawrence’s long throw.

“I wouldn’t say struggling. Strikers who struggle are strikers who don’t create chances. Once you’re creating chances then it’s just a matter of time before it falls into place and that’s exactly what happened,” he explained.

“The biggest thing for a striker is to score, but once you’re creating chances and helping the team (that’s fine) because it’s not all about goalscoring; it’s about helping the team, holding up the ball, doing defensive work and I’ve been doing that for the whole tournament.

“When it matters most big players step up, like I did in the semi-finals, and come Sunday that’s what I’m looking to do again.”

The final kicks off at 7:30 p.m.(6:30 p.m. Jamaica time) at Lincoln Financial Field here and he said the Reggae Boyz’s goal is to win.

“To be honest, I just want to win this thing. I think it’s something the entire country is going to be proud of. Obviously, as a striker you want to score. To score a goal would be fantastic but the bigger picture is to win this thing,” said the Vancouver Whitecaps striker.

“We’re not satisfied by beating America. Our eyes were on the prize from day one and thanks be to God, we’re just going to continue what we’ve been doing, first of all putting God first, then team work, team ethics and our work rate is going to show that we want this more than anyone else.”