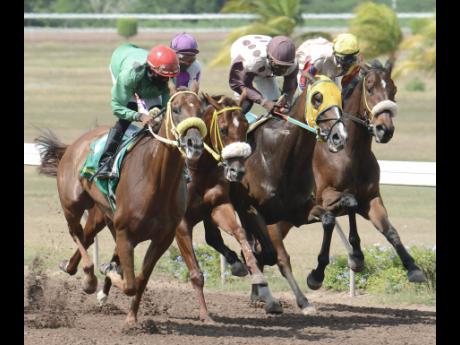 Having chased home the impressive three-year-old colt, BUZZ NIGHTMARE, in his last two races, ROYAL ASSAULT should come into his own and win the ninth race over 1100 metres for native and imported three-year-olds at Caymanas Park today.

With leading jockey Shane Ellis again riding for trainer Anthony Nunes, ROYAL ASSAULT has acquitted himself well in defeat and back in action with only 51.0kg, should make all the running in a field of seven.

Although he just held on for second from the fast-finishing WINGS OF HOPE that day, I expect him to hold the Harry Parsard-trained WINGS OF HOPE at bay with a furlong less to travel.

The same is true of the Nunes-trained BALLON D'OR (late headway), who finished 31/4 lengths fourth and SHINING LIGHT, who could fare no better than sixth.

Significantly, ROYAL ASSAULT has won twice from six starts, both coming over today's trip. The chestnut colt by Blue Pepsi Lodge out of Mayken won over the distance on his debut in January and followed up over the same in non winners of two on March 22 in the good time of 1:06.4.

Next time out he had to settle for eighth place behind ALI BABA in the 2000 Guineas over a mile in April, but showed pace for a long way before the distance took its toll.

Now back over his pet trip and in very good nick, ROYAL ASSAULT should win from the lightly raced DWAYNE STAR (Robert Halledeen up), who has won twice over the straight from only three starts and appears to have lots of scope.

Other firm fancies on the 10-race programme are the recent winner ALPHALETTA to repeat in the second race with Wesley Henry again in the saddle; RUNNER in the sixth; GOLDEN BULLET to rebound with a win in the seventh race; and STIR IT UP, now fitted with the visor, to turn the tables on old rival SIR BIGGS in the closing race over 1400 metres for maiden three-year-olds.