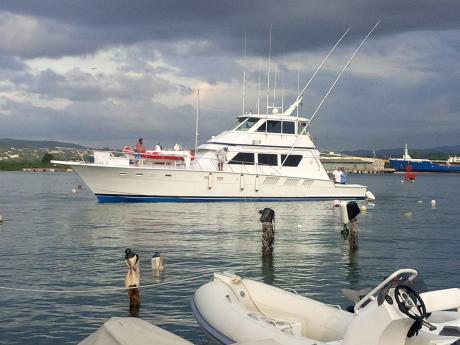 Okoye Henry
One of the record 41 boats competing in the 54th staging of the Montego Bay International Marlin Tournament.

Anglers will this evening hang up their fishing rods after three days at sea as the curtain will come down on the 54th staging of the Montego Bay International Marlin Tournament on at the Montego Bay Yacht Club.

The popular tournament, which is being contested by a record 41 vessels, started on Wednesday and from all indications, events should reach fever pitch today as the  anglers compete for the top places.

When The Gleaner visited the docks yesterday, the tournament was in full swing and according to tournament director, Robert ‘Bobby’ Stewart, while the second day was a “tad dawdling” when compared to the opening day, he is confident that today will chock-full of excitement.

“Today (Thursday) is a bit slower yes, but tomorrow (Friday) I believe we will step up again like on the first day with higher catch rates,” said Stewart.

Today will also feature the awards and prize giving ceremony, which will be addressed  by Montego Bay Mayor, councillor Glendon Harris. A fireworks display will follow.

On Wednesday’s opening day, the tournament yielded a record catch of 17 Blue Marlins, which had  Stewart quite elated.

“Not only was it a record turnout of boats but 17 Marlins on the first day is a record for us,” said Stewart. “Once caught, they were released under the competition’s current rules enacted two years ago.”

“There was lots of excitement on the water and on the docks afterwards, everybody celebrated,” said Stewart.

Last year, a record breaking 27 boats competed, where on average 10 Blue Marlins were caught per day. This exceeded the catch rate of other notable tournaments in the region.