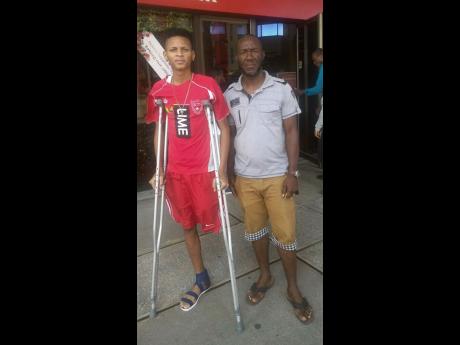 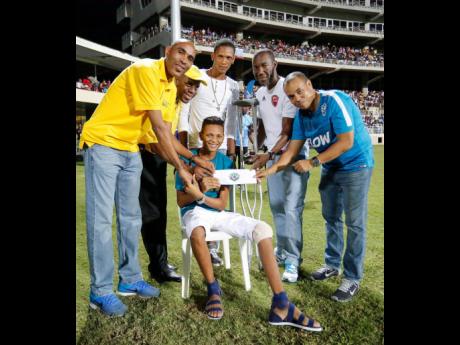 The life of a brilliant high-school footballer was tragically cut short yesterday.

Jordan Foote, who almost single-handedly led the unheralded Holy Trinity High School to the FLOW Super Cup final in 2014, lost his battle with bone cancer at 10 a.m. in the University Hospital of the West Indies.

His mother Nadine Sutherland said the footballer died peacefully. Her home, she said, was "full of persons showing support" despite heavy afternoon rain.

"His last moment was peaceful as he saw everybody he wanted to see," Sutherland said. "Words can't explain how I am feeling. The family was right there with him through it all," she told The Sunday Gleaner. "We are all taking it hard. He was our hero and pet," added a tearful Sutherland.

Foote took his last breath with his mother, a brother, cousin and school coach Devon Anderson by his side.

Last year, Foote started feeling pain in his knee during preseason preparations for the Manning Cup. He was diagnosed with bone cancer and had his leg amputated last December. There were plans to get him a prosthetic leg but he was readmitted to hospital earlier this year.

Foote, the third of four sons for his mother, was born on June 1, 1997 and attended Elletson Primary School before moving on to Holy Trinity High.

Anderson, who admits to sharing a fatherly relationship with his former charge, said he was shaken up.

"It's difficult to say how I feel right now," said Anderson, adding he was at Holy Trinity High trying to gather his thoughts and reflecting.

The late footballer was ruled out of last season's FLOW/ISSA Manning Cup as well as school.

His former principal, Margaret Bolt, described him as "a young man with potential and a lot to give back to society".

"He wasn't a brilliant academic student, but he really tried. At football, he was unbeatable, he was the life of our team and put our school on the map," Bolt underlined.

"Condolences to his family on behalf of myself and FLOW. It is very sad news to hear of his passing. We want to remember Jordan as the bright, positive and happy young man he was," FLOW's head of marketing and products, Carlo Redwood, said.

President of the Jamaica Football Federation, Captain Horace Burrell, expressed sincerest condolences to the family, friends, schoolmates and former teammates of the footballer.

"It is with deep sadness that we hear the news of his passing" Captain Burrell stated. "Many of us remember not just his skills on the field, especially in the 2014 season, but his positive attitude and encouragement to his teammates at Holy Trinity, even when he was in hospital.

"This spirit, even in adversity, we are sure, impacted many. Our heartfelt thoughts also extend to his former coaching staff, the ISSA fraternity and the principal and staff of Holy Trinity."