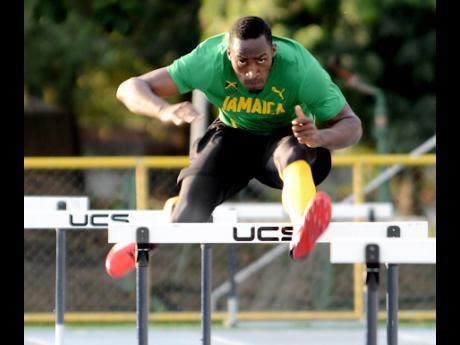 Sprint hurdler Hansle Parchment says he is extremely disappointed after confirming his withdrawal from the 2016 Rio Olympics, but said taking himself out of the equation and paving the way for Andrew Riley to compete was the right thing to do.

Parchment, who got hurt earlier this season and was given a medical exemption from Jamaica's Olympic trials with the requirement of proving his fitness ahead of the Games, left Jamaica's training camp yesterday and returned to Jamaica after accepting that he would not recover in time.

The 2012 Olympic bronze and 2015 World Championships silver medal winner has been struggling with persistent hamstring and groin issues over the past couple months, and through a release from his manager, Juliet Campbell, admitted that he has accepted that he would not recover sufficiently to meet the defined competition deadline.

Riley was on his way to Brazil on Tuesday and is expected to join up with the rest of the team inside the Athletes' Village in the Barra region of Rio de Janeiro.

"I knew Andrew Riley was waiting to find out if he would compete or not, and I didn't know if I would be ready, so to allow the Jamaica management to give Andrew his chance was the right thing to do. He will compete with full fitness and confidence in his form and ability, and I hope he does well," said Parchment.

The athlete added that he was disappointed to be missing the Games, but is determined to take his time to recover properly and return stronger for next season.

"It's very disappointing as I've worked extremely hard to get here, but this is track and field and it's one of the hazards that comes with the sport, so I have to accept this unfortunate situation. I'll make a full recovery and train hard over the fall and winter to return stronger and quicker next year."