I want to be the greatest mother - Fraser-Pryce 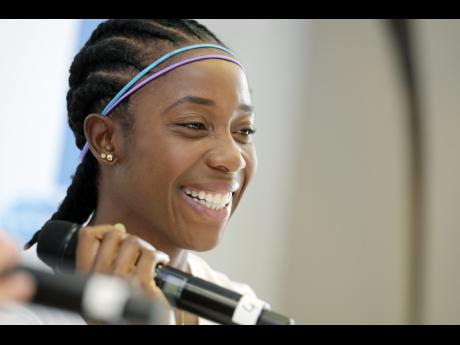 Superstar Jamaican sprinter Shelly-Ann Fraser-Pryce is readying for an experience quite unlike any she has had before, but for her, the objective remains the same be the greatest.

Shortly after announcing her pregnancy yesterday, Fraser-Pryce admitted that she was looking forward to defending her 100m title at the upcoming World Championships but has now shifted that focus on becoming the greatest mother she can be.

Fraser-Pryce will miss the chance to add to her seven World Championships gold medals in London this Summer, but the 30 year-old who is regarded as one of the best female sprinters in the history of the sport, remains excited about embarking on this new chapter in her life.

Fraser-Pryce also took time to underline her gratitude for the outpouring of support she has received since making the big revelation.

The two-time Olympic champion took to social media yesterday morning to announce her pregnancy, which led to a flood of congratulatory messages from scores of individuals, including fellow athletes.

"All my focus heading into training for my 2017 season was on getting healthy and putting myself in the best possible fitness to successfully defend my title in London2017, but life is filled with many blessings with God, so here I am thinking about being the greatest mother I can be with my biggest blessing and the promise God made me," Fraser-Pryce said in a note to her supporters, which she posted to her Facebook account.

The athlete also confirmed that she will be returning to the competitive action next season.

"Moving forward on this journey, I look forward to seeing you all in 2018 when I return to competition on the tracks and around the World. Thank you to my sponsors NIKE, GraceKennedy and Digicel for their unwavering support and a loyal fan base that's willing to join and share in my journey," Fraser-Pryce said.

Fraser-Pryce, who in 2011 married her long-time boyfriend, Jason Pryce, had earlier announced via Instagram that she was expecting.

The sprinter, who won a bronze medal in the 100m at last year's Olympic Games in Rio de Janeiro, Brazil and anchored Jamaica to silver in the 4x100m, endured a tough season in 2016, where she was forced to overcome a serious toe injury that affected her all year.

She was also faced with off-track issues after it was announced by her long-time coach Stephen Francis that the athlete had decided to part ways with him before a controversial U-turn was taken months later.

Fraser-Pryce will have some company as female track stars who are new mothers after fellow sprinting standouts Sherone Simpson and Brigitte Foster-Hylton gave birth last year.