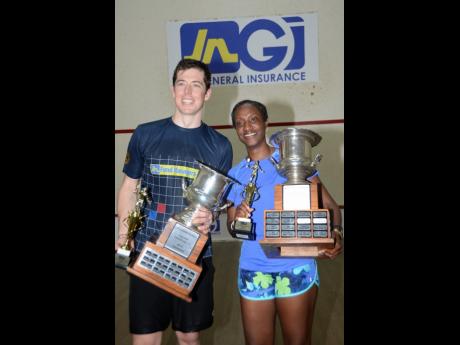 Contributed
Squash stars Chris Binnie (left) and Karen Anderson show off their trophies after being crowned men’s and women’s champion, respectively, at the JNGI All Jamaica Squash Championshipswhich wrapped up at the Liguanea Club on Friday night.

Squash queen Karen Anderson cemented her dominance with a record-breaking 13th title, while defending men's champion, Chris Binnie continued his winning streak as the JNGI All- Jamaica Squash Championships wrapped up at the Liguanea Club on Friday night.

Anderson fought off a nagging injury to beat Barbadian Alex Jordan 11-9, 11-6, 11-6 and add another achievement to her storied career. The victory puts Anderson on par with the legendary Wayne Burrows, who holds the men's record.

Putting the achievement in perspective, Anderson said: "This time, 13 is a lucky number because, although this record has not come easy for me, I have been fortunate to play such an amazing sport and to have remained relatively healthy throughout my career."

For his part, Binnie added another chapter to his own story by winning his sixth consecutive title and seventh overall. The squash ace won 11-4, 11-4, 7-11, 11-7 victory to hold off his nemesis, Lewis Walters, yet again.

"All-Jamaica is a special tournament because it's one of the few times I get to play in Jamaica and so I was happy to win it in front of my home crowd and to defend my title against Lewis, who is such a great player and a tough competitor," Binnie said.

Chris Hind, general manager of JN General Insurance, the tournament's title sponsors, said, "It was a week of exciting competition, which ended on the perfect note with Karen Anderson winning a record 13th title. JNGI is proud to have supported this excellent tournament and to continue contributing to the development of local squash."