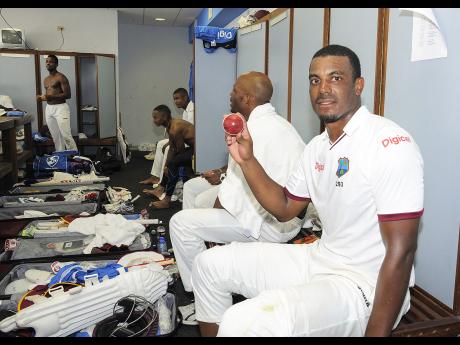 Head coach Stuart Law has also thrown his support behind Shannon Gabriel, in the wake of the player's error that led to West Indies' heartbreaking defeat to Pakistan in the third Test here Sunday.

The Australian said Gabriel had been exemplary in the series in his role as spearhead of the Caribbean side's attack, and encouraged the entire team to rally around the embattled player.

"He was devastated ... [over] what went on but he's a big man and he led the team beautifully when we took the field," Law told reporters here Monday.

"He's come a long way. He got through a whole series without getting injured, our leading wicket-taker and bowled with great pace and sustained pace, and kept coming.

"You can't ask for much more from him for what he's picked to do in the side. I spoke to him ... and he's feeling better but it might take a while for him to come to terms with what went on."

He added: "As I've said to the team, we've got to stick together. We've got to back our teammates and look after each other."

With West Indies seeking to pull off a draw to earn a share of the honours in the three-match series, Gabriel joined century-maker Roston Chase in a last-wicket stand to frustrate Pakistan for just over half-hour.

But off the last delivery of the day's penultimate over, Gabriel lost his composure and missed a massive slog at champion leg-spinner Yasir Shah and was bowled for four, handing Pakistan a 101-run victory and a 2-1 series win.

Law, presiding over his first-ever Test tour in charge of West Indies, said the series defeat was one of missed opportunities over the three matches.

"The way Pakistan play their cricket, they seem to be going nowhere and they offer a chance and you can capitalise and we just didn't capitalise," he explained.

"We probably had the chances to compete better in Jamaica, to win easier in Barbados and definitely to snatch a victory here in Dominica.

"If we keep missing those chances ,we're going to make it hard for ourselves but once we start taking them, batting and bowling will become a lot easier."