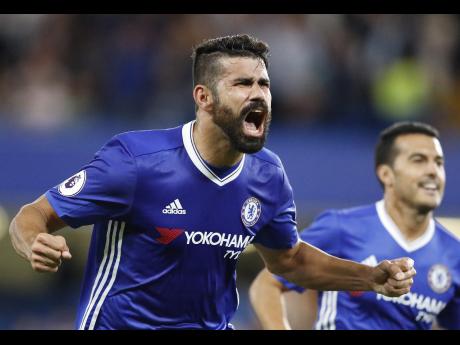 Diego Costa's time at Chelsea seems to have come to an end.

The Spain striker said Chelsea manager Antonio Conte doesn't want him playing for the English team next season, so he is on the market for a new club.

"The other day I received a message from coach Conte saying that I'm not part of his plans," Costa said after Spain's 2-2 home draw against Colombia in a friendly on Wednesday. "I'm a Chelsea player because I'm still under contract, but the coach doesn't want me there, so I'll have to leave."

Costa scored 20 goals for Chelsea to help the club win the Premier League title this season, finishing as the competition's third-highest scorer. He has scored more than 50 goals with Chelsea since joining the club from Atletico Madrid in 2014.

Shakespeare gets the job

Leicester hired Craig Shakespeare as the club's permanent manager on a three-year deal yesterday following his successful interim spell in charge of the 2015-16 Premier League champion.

Shakespeare replaced title-winning manager Claudio Ranieri in February on a short-term deal and won eight of his 16 games in all competitions, helping Leicester pull clear of the league's relegation zone.

"Craig has shown all the qualities in leadership, motivation and talent management that are required to be successful in this role," Leicester vice-chairman Aiyawatt Srivaddhanaprabha said.

This will be Shakespeare's first stint as a full-time manager. He was Leicester's assistant manager under Ranieri and predecessor Nigel Pearson, and had the same position at Hull.

"This is a really exciting opportunity for me to continue along this new path in my career," the 53-year-old Shakespeare said, "and to continue to work with a club and a group of staff I've grown extremely close to."

When the stadium announcer called for a minute's silence to honour the victims of last weekend's London attack, the 11 Australian players on the field lined up at the centre circle with arms on their teammates' shoulders.

Their opponents from Saudi Arabia, however, milled about separately on the other side, seemingly ignoring the gesture.

The Australian football federation, known as FFA, said after the match that the Saudis knew about the plan to hold a minute's silence before yesterday's World Cup qualifying match but declined to participate.

"Both the (Asian Football Confederation) and the Saudi team agreed that the minute of silence could be held," the Australian federation said, according to the Sydney Morning Herald. "The FFA was further advised by Saudi team officials that this tradition was not in keeping with Saudi culture and they would move to their side of the field and respect our custom while taking their own positions on the field."

England, Venezuela for U-20 WC final

England and Venezuela both came from behind yesterday and both advanced to the Under-20 World Cup final.

The English team got a pair of goals from Dominic Solanke in a 3-1 win over Italy in Jeonju. Venezuela goalkeeper Wuilker Farinez made the key save in a shoot-out to help his team beat Uruguay 4-3 on penalties after a 1-1 draw in Daejeon.

After Riccardo Orsolini gave Italy the lead in only the second minute, Solanke equalised in the 66th and added the third in the 88th. Ademola Lookman scored the other goal for England in the 77th minute.

England and Venezuela are in the tournament's final for the first time.