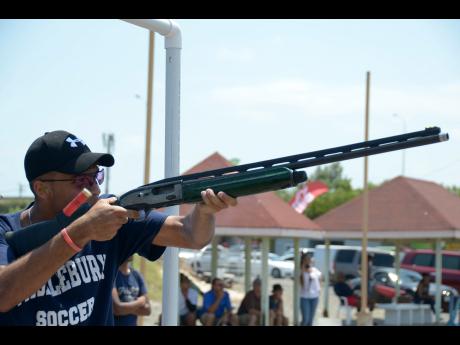 Ian Allen
Brandon Reid during the super six shoot off of the NCB Capital Market Junior Sporting Clays which was held at the Jamaica Skeet Club in Portmore, St Catherine, yesterday.

Defending champion Brandon Reid staved off a tough challenge from Nicholai Clarke to capture his third successive NCB Capital Market National Junior Skeet Championship at the Portmore range yesterday. The US-based Reid also topped the extended juniors section by virtue of a shoot-off after ending the main competition tied on 96 points with Clarke.

Reid and Clarke were joined by Roman Tavares-Finson, Zachary Chen, Todd Lazarus, and Diallo Richardson in the top six shoot-off.

However, for four out of the five stations, nothing could separate Reid and Clarke as they went neck to neck. But by virtue of shooting before his main competitor, Clarke put the champion under pressure as he was near perfect at all his shoot-off stations.

But after coming into the final station tied at 113-113, Clarke choked and missed his first pair and last pair of birds and only accounted for two hits. Reid then held his nerve and hit all six (three pairs) birds in his final three attempts.

The 18-year-old told The Gleaner that he really enjoyed the challenge from Clarke and was hoping for a little more from his rival at the final station. "Pressure is always good. It brings the best out of people, and I strive under pressure anytime. So I always try to do good when I am in those moments because not everyone can come through those moments (victorious)," he said.

"It wasn't really pleasing (Clarke's final station) because I was looking to compete with him right up to the end. But I am very happy to get the win," he continued.

Reid had very limited practice coming into the tournament and thought he could have scored much higher with more practice. "It's always nice to shoot against some of the best young shooters ... so I feel accomplished and blessed. I don't know (if he could win bigger with more practice), but practice makes perfect, so if I had practiced more, maybe I would have shot better," he added.