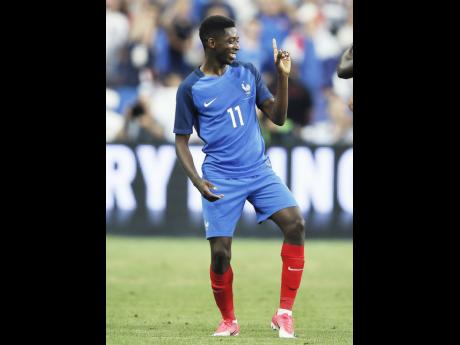 AP
France's Ousmane Dembele reacts after scoring his side's third goal during a friendly match between France and England at the Stade de France in Saint Denis, Paris yesterday.

Winger Ousmane Dembele scored the winner as 10-man France overcame a red card for Raphael Varane early in the second half to beat England 3-2 in a pulsating friendly yesterday.

Teenage striker Kylian Mbappe set up the 20-year-old Dembele's winner in the 78th minute with an astute pass, and the youthful attacking pair caused problems all night for a patchy England defence, with their electrifying speed and skill.

Striker Harry Kane scored both goals for England, while defenders Samuel Umtiti and Djibril Sidibe got their first goals for France, as did Dembele. Only a fine stop from goalkeeper Jack Butland in injury time, and the crossbar earlier, denied Mbappe his first international goal.

It threatened to be another frustrating night for France at the hands of technology, with Varane sent off two minutes into the second half for conceding a penalty. Match referee Davide Massa awarded it after Varane fouled midfielder Dele Alli and then, after using the video referral system, brandished the red card.

Massa took around one minute to make his decision, talking into his earpiece as he consulted the video assistant referee, while France's players remonstrated, some shaking their heads and with midfielder Paul Pogba laughing in disbelief.

"I've not seen it again, but from my initial view, it looked the right call," England coach Gareth Southgate said. "Clearly, even with video, you won't get every decision right. You'll still get an element of one person's judgment within that."