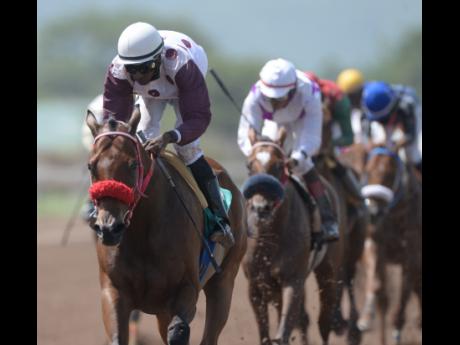 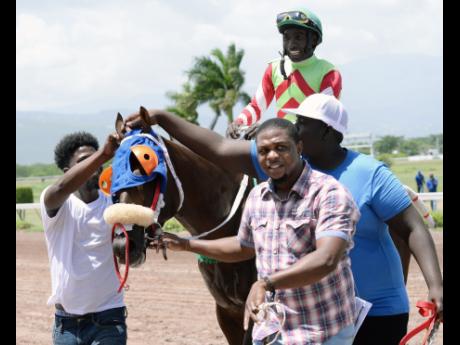 Jermaine Barnaby
HEAT IT UP with jockey Shane Ellis is being led back to the winners' enclosure by trainer Tyrone Prince after his win in last saturday's second race. At left is Ackerm McKenzie while partially hidden is Romane Marshall. 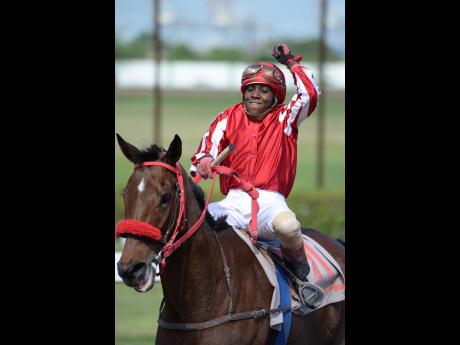 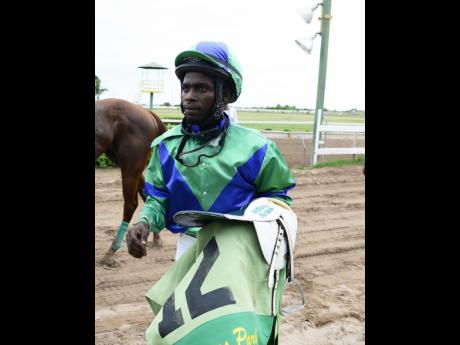 FOLLOW BACK A ME won impressively on June 10 and should follow up with another victory in tomorrow's opening race of the Sunrise-6.

Ridden by apprentice Linton Steadman, the American-bred filly cruised to a nine-length win over 1820 metres. She has been looking like a top-class filly at exercise since that performance and should not be opposed. WONG DON, a fast time (1:25.4) winner over 1400 metres on June 24 should occupy the runner-up spot.

The second race is a 1600 metres event for native-bred five-year olds and up non-winners of two. The ones to watch are LITTLE PRINCE and QUEENOFSAINTROSE.

The former won at this level on May 10 and was disqualified. Next time out, he finished down the track after being fitted with cheek pieces. Those have been removed for tomorrow's contest so LITTLE PRINCE will run a big race and recoup losses.

QUEENOFSAINTROSE finished behind MR COOKIE on June 28, but she has the handicaps in her favour tomorrow and should turn the table.

Race three looks tailored for the improving DRAGLINE. He ran really well last Wednesday when coming to the non-winners of three group for the first time and the connections have shown their hand by calling for their favourite rider, champion jockey Omar Walker.

MONEY MOVER is a banker in race four which will see $180,000 claimers (restricted earnings) going over 800 metres. The selection was third by four-and-half lengths in a 1000 metres race involving the best in this claiming group on May 20 clocking 1:01.2 for the distance. The connections also appear to be very confident as they have chosen to give the mount to jockey Shane Ellis who will ride 3kg overweight.

Ellis will be seeking a quick double aboard HEAT IT UP in race five but LIGHT BRIGADE will prove a tough nut to crack.

HEAT IT UP won impressively last weekend clocking 1:01.3 for 1000 metres round and will return with the same weight. LIGHT BRIGADE, however, is at his lightest for more than six months and should show his appreciation by leading all the way from the number one post position.

Race six is very knotty event for maiden three-year-olds over 1100 metres. TOUGH COOKIE who will come out of the number one post position must be watched as she has competed against some of the best of her age group this season. The trainer-jockey combination pulled off a coup with Holy Light in the last race on June 28 and could have another one up their sleeves. The one I like best, however, is DIOSA DE ORO who will like the reduction in distance after falling away over 1600 metres last Wednesday.

BIBLICAL LEGEND was second in that race and DIOSA DE ORO was ahead of that one when they clashed going 1200 metres on June 3.