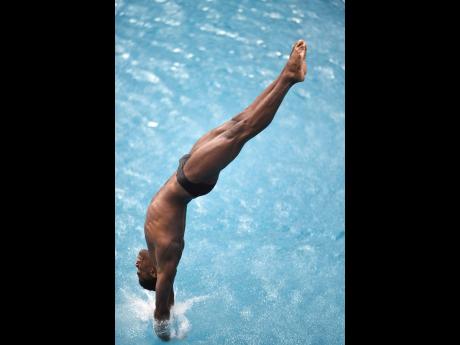 Jamaica's Yona Knight-Wisdom is frustrated after going out at the first round in the men's 3-metre springboard diving event at the FINA World Championships in Budapest, Hungary, last Wednesday.

Knight-Wisdom finished 28th out of 56 but missed out on a spot in the semi-finals by 10 places.

The 22-year-old's first dive scored him 68 points and put him in 18th spot, but things did not go according to plan afterwards. His next dive put him on 135.5 points, but he fell to 22nd in the standings, then 27th after his third dive moved him to 193.25 points.

Knight-Wisdom moved up to 25th in the standings on his fourth dive, which saw him on 257.75, but he slipped to 29th, his lowest placing on the day, when his fifth dive put him on 312.15 points. His final dive took him up one spot and he finished on 385.

He told The Gleaner that although he is disappointed with the result, he did not think his performance was that bad.

"I'm frustrated with the final position," Knight-Wisdom said. "Twenty-eighth doesn't reflect how I felt with the performance. My score was OK, 385, twenty-two points short of the top 18.

Reflecting on the performance, Knight-Wisdom said that perhaps his approach could have been different.

"My two new dives both had room for improvement - both a little short of vertical. So if I could do them again, I would try to be more aggressive. I worked very hard in my training sessions coming into this competition, but I did struggle to find consistency in my dives. However, they have a lot of potential, so I will continue to work on them," he said.

Knight-Wisdom said that he had the Jamaican fans in mind and is grateful for their support regardless of his results.

"I appreciate and love the continued support," he said. "It helps to keep me positive and motivated to keep pushing to represent the nation at the highest level and to the best of my ability."

Knight-Wisdom will now turn his attention to next year's Commonwealth Games on the Gold Coast in Queensland, Australia, by putting in what he describes as hard work on improving the consistency of his table standings.

He added that he also has an eye on the Tokyo Olympics in 2020, and he will also be looking to source more sponsorship to help prepare for those games.