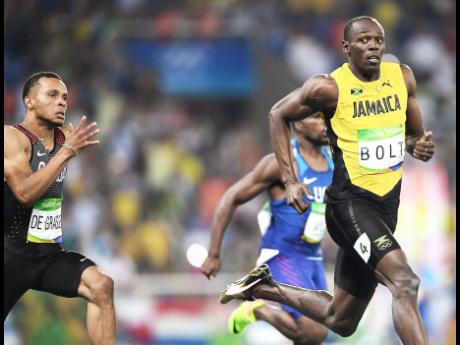 Canadian sprinter Andre De Grasse says he is devastated after suffering a hamstring injury that has put an end to his season and his ambitions at this week's IAAF World Championships in London.

"The entire year this 100 metres race in London was my focus. I am really in the best shape of my life and was looking forward to competing against the best in the world," De Grasse said through a release.

"To not have this opportunity is unimaginable to me, but it is the reality I am faced with. I am sad to miss this chance, but I am young and will be back and better than ever in the near future," De Grasse added.

The athlete is expected to be out for four to six weeks.

De Grasse's agent, Paul Doyle, earlier confirmed questions raised by The Gleaner late yesterday evening, revealing that the 22-year-old suffered a grade-two strain of his hamstring during a training session on Monday, while working on his starts.

"I am confirming that Andre De Grasse is out for the rest of the season. On Monday, in his last starting session before the World Championships, he sustained a grade-two hamstring strain to his right leg. We tried to do everything we could to have him ready, but he is just not going to be ready," Doyle said.

Doyle also noted that the sprinter is likely to require up to six weeks to fully recover from the injury.

De Grasse, who won a silver medal in the 200m, plus bronze in the 100m and 4x100m at last year's Olympic Games, in addition to 100m bronze at the previous World Championships, was expected to challenge Usain Bolt for the 100m gold this weekend inside the London Stadium.

He was also expected to compete in the 200m as well as the 4x100m with Canada.