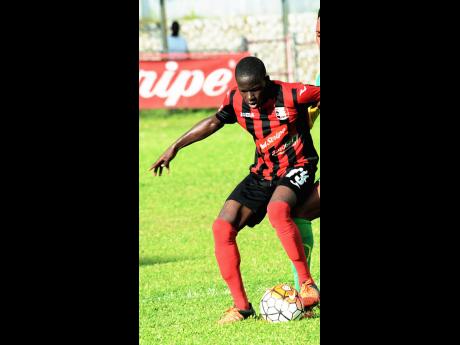 Fabian Reid's knowledge of conditions in Trinidad and Tobago could help the Arnett Gardens forward gain a national senior team debut when the Reggae Boyz face the Soca Warriors in a friendly at the Hasely Crawford Stadium tomorrow.

Reid spent two seasons at San Juan Jabloteh in the Trinidad and Tobago Pro League before returning to Arnett Gardens in January and guided the local club to the national title with six goals in the latter part of last season.

His performance was noticed by national interim coach Theodore Whitmore, and the player was selected in a local-based 18-man squad for the game.

Now, Reid hopes his experience in the twin-island republic will help the Reggae Boyz gain a win tomorrow.

"This is the first opportunity for me to represent the country. It is just the hard work I have put in, and it has paid off with a call-up to represent Jamaica against Trinidad and Tobago," Reid told The Gleaner last weekend during the Reggae Boyz training session at the UWI/JFF/Horace Burrell Centre of Excellence.

"I am just working hard in training and awaiting my chance to play. I was in Trinidad for two seasons with San Juan Jabloteh. I got a lot of experience in Trinidad as a professional because it is a Pro League," the 25-year-old former Clarendon College player said.

Reid said that although the Jamaica, squad is made up of local club players, they can match up with Trinidad and Tobago.

"I am sure we can match up with Trinidad. We have good talent in the team. It is a great feeling going back there to face the Trinidad and Tobago national team," Reid concluded.