More than 600 swimmers for BK/Popeyes meet 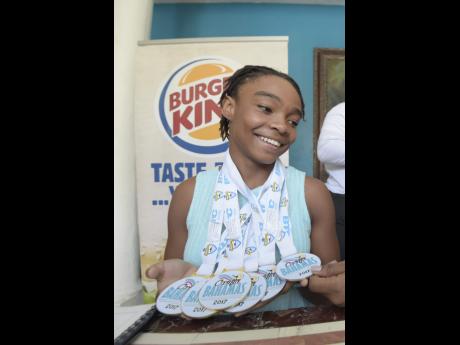 More than 600 swimmers from 40 schools will participate in the Burger King/Popeyes Prep and Primary Schools' Swim meet, tomorrow and Saturday.

Open to swimmers 6-12 years old, the two-day event has attracted some of the island's best, competing in timed finals over 26 events. It is being hosted in partnership with the YMCA.

Burger King has been title sponsor of the meet for the past 17 years, and last year, Popeyes rejoined as co- sponsor. Both brands will be spending a whopping $2,000,000 on the event, making Restaurant Associates Ltd (RAL) the largest corporate sponsor of amateur swimming in Jamaica. Wisynco is an associate sponsor through their WATA brand.

Sabrena McDonald Radcliffe, head of sales and marketing for RAL, says that the company "is committed to the growth and development of swimming as an activity that encourages discipline, perseverance and teamwork in the young and will help in moulding them into responsible and accomplished adults."

Current Carifta Games champion, whom Burger King has sponsored for multiple regional meets, the 13-year-old Alvaranga, earned her first Burger King/YMCA Swim meet medal at the age of six. At the recent Carifta Games in Jamaica, she won eight medals in her first year competing in the 13-14 group.

The meet begins at 8:30 a.m. tomorrow at the National Stadium Pool and will be declared open by Mayor of Kingston and St Andrew Delroy Williams.

Swimmers will compete until 4 p.m. in various events, including the 100m freestyle, 50m backstroke, 50m butterfly, and 4x50m Medley. On Saturday, the meet runs from 8:30 a.m. to 3 p.m., closing with an awards presentation ceremony.