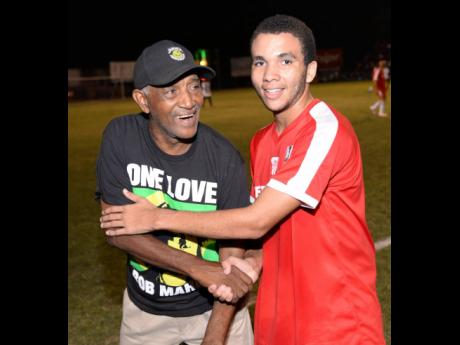 Jermaine Barnaby
Organiser Clive 'Busy' Campbell (left) and one of Bob Marley's grandsons, Kristian Marley, share a light moment at the Bob Marley One Love football match at Anthony Spaulding Sports Complex in 2016. The charity event returns to the venue this Wednesday.

The Reggae Girlz qualified for the FIFA Women’s World Cup for the first time in the country’s history last October and they will line-up against an Entertainers and Masters Invitational, a Referees Invitational and Christian Ambassadors for the Bob Marley trophy.

Although organiser Clive ‘Busy’ Campbell, couldn’t confirm which girlz will be on show, he was nevertheless honoured to have them at the event.

“They have done so well and we think it’s right that we invited them. I feel honoured to be honouring them, to invite them to the 38th renewal of the Bob Marley One Love, it is significant,” Campbell said. “I raise my hat to Cedella (Marley for her vision to sponsor the Girlz) and we are hoping from all this, that the Girlz can be successful and we should all come out and support the games.”

The event, which has also honoured major contributors to sports and music, will this year honour musicians James Chambers, popularly known as Jimmy Cliff and Nadine Sutherland, along with Arnett Gardens football team manager, George Phang.