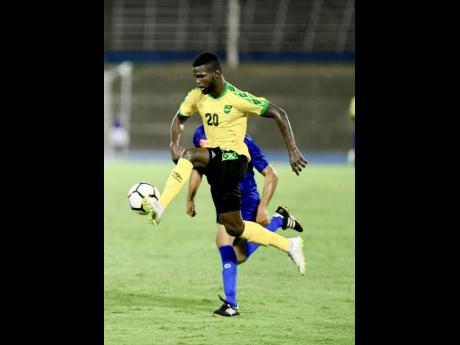 File
Jamaica’s Kemar Lawrence (foreground) takes the ball under control while being chased by Cayman Islands defender Kyle Santamaria during their CONCACAF Nations League game at the National Stadium on Sunday, September 9, 2018.

Veteran coach and football analyst Bradley Stewart believes poor preparation and a lack of goalscoring throughout the tournament were the reasons for Jamaica’s disappointing finish in the qualifying round of the CONCACAF Nations League.

The Jamaicans finished eighth and although that was good enough to give them a spot in this summer’s CONCACAF Gold Cup, it meant that they now find themselves in League B in the Nations League proper this September, as only the top six qualify for League A.

Jamaica went down 2-0 to hosts El Salvador on Saturday in a game where both goals were their own making. Goalkeeper Andre Blake fumbled the ball when it came to him from a free kick, allowing Nelson Bonilla to tap into the empty net in the 48th minute. Damion Lowe, much like Blake, left the game embarrassed after heading the ball into his own net in the 85th minute, sealing Theodore Whitmore’s side’s fate. Darren Mattocks also had a night to forget as he was shown a straight red for reckless play in second-half stoppage time. It was an all-round poor showing from the Jamaicans, who only mustered two shots all game, with neither being on target.

Stewart blamed this outcome on how little training the team did together prior to the game.

“I was a little concerned based on what I thought was lack of proper preparation for this group,” he said. “I have not been aware how long this group has been training [together]. But I am aware that at the international level, you have to fine-tune things, and two or three training sessions are not going to prove adequate.”

Stewart said that Jamaica, ranked 64th international, and sixth in CONCACAF, should have been able to secure the point they needed to secure League A status against El Salvador, who are rated 93rd in the world and 10th in the region. He also questioned Whitmore’s selection and tactics for the match.

“Every time we put a national team together, we want the best out of them,” Stewart said. “The only way we can get the best out of our players is to have them in training for a good time. You need training sessions to look at conditioning and tactical situations and, hopefully, put the best team out there. So every time we play, we expect the team to give of their best. But that best is dependent on how we prepared.

“The fact that we lost and are still in the Gold Cup is a positive, but to have lost at this stage is suggesting that things may not [be going] as well as we expected. Playing away, especially in the Central American environment, is usually very tough, so we have to have the right selection and the right tactical arrangement – how we defend, deep or high press, or play with numbers behind the ball so we can fight as a unit. I am sure the players gave all they had, but it might not be enough at that stage. So, hopefully, we recognise the weaknesses that exist and correct them,” he said.

Despite finishing on nine points, like Curaçao, Haiti, Canada, Cuba, Bermuda, and Guyana, Jamaica were the only team that failed to get into double figures with goals, netting nine times in four games. They will learn who they will meet in League B after a draw on Wednesday.