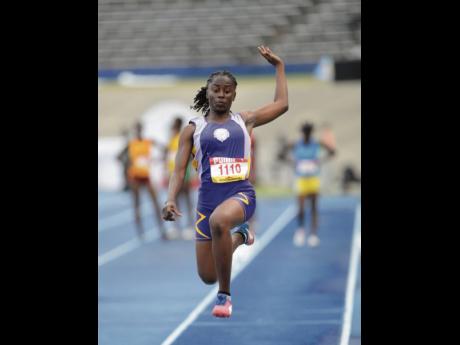 Shorn Hector
Ackiema Ricketts of St Hilda’s participating in the Girls’ Class Two long jump on the opening day of the ISSA/GraceKennedy Boys and Girls’ Athletics Championships at the National Stadium on Tuesday.

St Hilda’s High School won the inaugural staging of the ISSA Girls’ Championships in 1957, but the girls from Brown’s Town, St Ann, have not been able to stamp their authority on the event since.

Principal Heather Reid-Johnson has been making moves to change that, though, as they have hired a coach with the objective of restoring pride to the school’s athletics programme.

St Derrick Price is the man who is trusted to engineer the turnaround, and he believes that the school could start doing well again in the next two years.

“The programme was revived in 2017, so it is still young, but I believe that in the next two years, we should be able to get people in finals again and possibly on the podium,” Price said.

St Hilda’s have not been able to get a person into a final since the revival of the programme in 2017.

“The objective of the programme is to develop these young ladies to a point where they can become national representatives. This is the third year that we started the programme again, and we have huge plans for our girls,” he added.

One of the challenges Price has met since being hired is getting the girls to take part in the programme.

“We have been able to get the support of the parents, and that is key. We are a traditional high school, and the girls are expected to have a certain average, and if they fall below that expected mark by a point, the parents want to pull them from the team,” Price said.