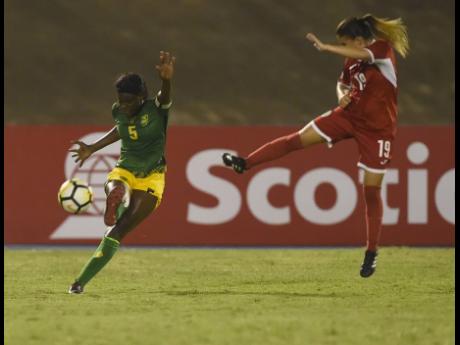 National senior women’s football team captain Konya Plummer is enjoying her time in South Africa, as the Reggae Girlz get ready for their friendly international game against the hosts – Banyana Banyana (Girls Girls).

The Girlz are in Durban and Plummer says that the team is settling in well as the atmosphere so far has been very inviting.

“The hosts are amazing,” she told The Gleaner. “The people give us a very friendly vibe and it makes it feel like home here.”

South Africa is now in the beginning of autumn as the nation is in the Southern Hemisphere, and Plummer describes the weather as perfect. She also enjoys the food the team has been exposed to and other aspects of South African culture she has seen so far. She said that the trip is a historical one for the Reggae Girlz as they have never played in the country before.

“It’s a great experience to be here in Africa, our motherland,” she said. “We’re going to go out there and do our best to represent Jamaica on the pitch as best as possible. As a captain, I am happy that all our hard work and dedication to playing has brought us this far.”

Plummer also spoke as captain at the official press conference ahead of tomorrow’s game, and she thanked everyone who has backed the national programme as the team gets ready for the FIFA Women’s World Cup in France this June.

“Preparing for the World Cup, I know that we are going there to do our best and only our best is good enough” she said. “So we just want to thank all our supporters back home and abroad for their continued support and love. Also want to thank my teammates for their hard work and everything going forward. We’re out here trying to inspire younger kids and are just doing this because we love you guys and appreciate the response to us and everybody who poured into this programme and is here for us.”

The Reggae Girlz and Banyana Banyana will clash at the Moses Mabhida Stadium in Durban, South Africa at 8:00 a.m. Jamaica time tomorrow.