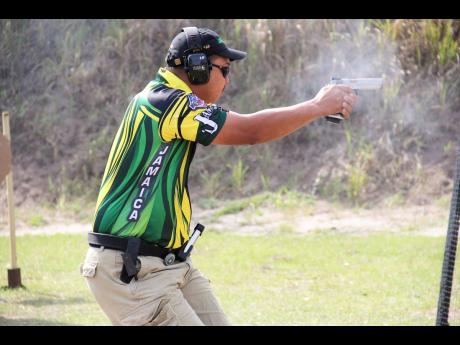 Set over 10 stages, the JIPT is a Level Three United States Practical Shooting Association-sanctioned (USPSA) match, the fourth of five local qualifiers for hopefuls to make Jamaica’s team to the 2020 World Shoot in Thailand.

The Caymanians, led by ‘B’ Class Tony Campney in Open Division and ‘B’ Class Ales Cevela in Limited, who will face Jamaica’s Greg Henry, are among today’s first overseas competitors on stages approved by the USPSA, which has American George Jones as head official to oversee the event.

Andrew Gardner, president, JRA, explained that the JIPT being accorded Level Three status means that the USPSA has more direct control of the event in order to ensure that its standards are being upheld.

“It’s the ninth staging but the first time as a Level Three. We have matured, got better at officiating and organising tournaments, having worked closely with the USPSA. To get to Level Three means the governing body has more oversight of what you are doing,” Gardner pointed out.

“At Level Two, the local body designed and approved stages. At Level Three, the governing body is far more involved in the organisation and design of stages, making sure standards are adhered to,” he added.

Canadian Nikolin Papadhopulli, Open Division, will also shoot on today’s opening day, which will feature a social, starting at 4 p.m., at which media are invited to familiarise themselves with the competitors, especially with intense action expected tomorrow when the likes of Yap and Bramwell bow into action in Limited Division, facing United States master Wally Burbage.

United States grandmaster, Eric Kamps will shoot production against Jamaica’s top hope, Darin Richards, as the competitors vie for the titles of high overall winners in their respective divisions.

“Action on Saturday starts with an opening ceremony at 8 a.m. First shot will be at 8:30, sharp,” Gardner warned. “We will be running a tight schedule so we can start the exciting Man vs Man steel shoot-off at 5 p.m., which the public will not want to miss at a cost of only $500, either day, for spectators.”