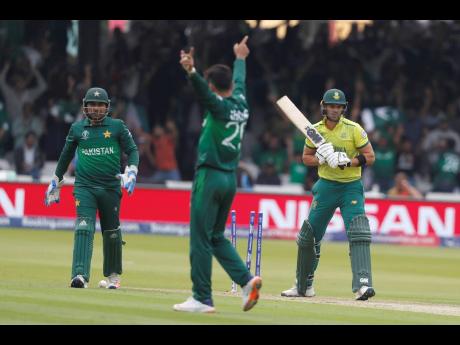 Pakistan needed the win more, as they had a game in hand and required fewer other results going their way, and delivered with a lively, enthusiastic performance before an equally passionate crowd heavily in their favour.

After losing narrowly to New Zealand on Wednesday, South Africa appeared ready to trudge home in a largely downbeat display. Pakistan were conceded 308-7, and South Africa’s batting struggles were underlined again when they petered out on 259-9.

Pakistan’s second win in six matches kept them in the play-offs hunt, three points behind England, with unbeaten New Zealand next in their sights on Wednesday.

The Proteas slumped to a fifth defeat and a washout in seven matches. With two matches to go, their misery is officially over, beside winless Afghanistan. Though this is the worst-affected World Cup because of rain, nothing has been damper than the performances from South Africa, who have failed to make the playoffs for only the second time.

Sohail scored his first two One-Day International centuries in March in the home sweep by Australia, but so-so scores in May in the England series doomed him to only one bat in the World Cup. He made eight in a total of 105 against the Windies. Only after Shoaib Malik made eight across three matches was Haris recalled, and he took his chance at Lord’s.

Haris featured in key partnerships of 81 with Babar Azam and 71 with Imad Wasim. He was the closest to scoring the first century by either team at this World Cup, but he couldn’t get the strike back at the death and was out for 89 trying to slog the penultimate ball, his 59th of a superb innings that included three sixes and nine boundaries.