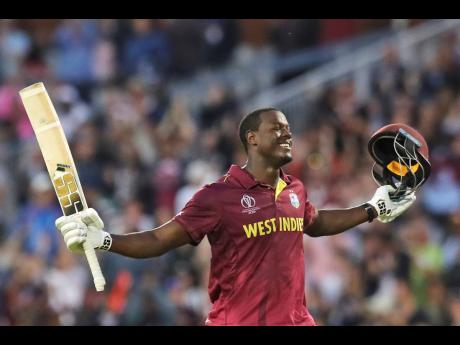 AP
Windies’ Carlos Brathwaite celebrates after scoring a century during the ICC World Cup match against New Zealand at Old Trafford in Manchester, England, on Saturday.

“His work ethic is really good. He’s not one to shy away from his responsibilities,” Holder told media here following West Indies’ five-run defeat at Old Trafford.

“And he puts in a really good effort into his preparation. And that’s one thing that I credit him for. The knock that he played today is not surprising to me.

“I guess everybody could sit here and agree that we’d love to see that a little bit more often, but that’s the general feeling within the entire group.

“I think, as a team, we just need to be a lot more consistent, but seeing Carlos play the way he did doesn’t really surprise me. It’s just a matter for us to bring it together more often.”

In 31 previous One-Day Internationals innings, Brathwaite had never hinted at what was to come on Saturday, with just a single fifty to boast of and an average hovering around 15.

Against all odds, however, he unveiled a magnificent 101 off 82 balls to nearly single-handedly take West Indies to an amazing victory, after their innings lay in ruins at 164 for seven in the 27th over in pursuit of 292.

In one over from Matt Henry – the 48th of the innings – he savaged 25 runs, including three sixes, to put the equation firmly in Windies’ favour.

But with six runs needed from seven balls, he went for glory only to be caught on the ropes at long on by Trent Boult off seamer Jimmy Neesham.

“We fought right down to the very end. We came right back into the game when pretty much everyone thought the game was over,” Holder said.

“And credit to the lower half. The guys really put it in their hands today and took responsibility. [It was] top-notch by Carlos. He was outstanding. He gave us a chance, gave us hope and just unfortunate at the very end that we weren’t able to get a win.”

The Windies appeared out of the contest when opener Evin Lewis, batting at number eight due to injury, holed out to deep midwicket without scoring at 164 for seven.

However, Brathwaite strung together a series of partnerships with the lower order – adding 47 for the eighth wicket with Kemar Roach (14), 34 for the ninth wicket with Sheldon Cottrell (15), and 41 for the final wicket with Oshane Thomas (0 not out), to revive hopes of a win.

“We were all hopeful at the very end. We were way behind the eight ball in the middle overs. I think when Carlos came to bat he had more than 20 overs to bat, [and it was just] a situation for him just to knuckle down and get a partnership,” Holder said.