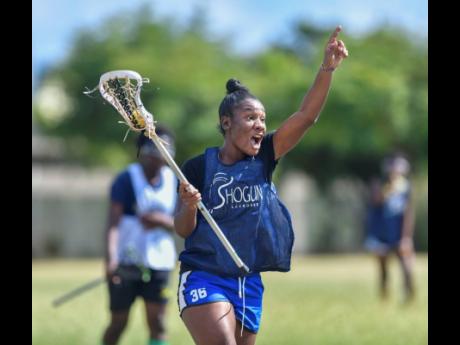 Gladstone Taylor
Shanice Thompson shouts instructions to a teammate as she runs towards the D in a training session for the national under-19 women’s lacrosse team at Wolmer’s High School for Girls earlier this year.

The Jamaican under-19 women’s lacrosse team got a big boost to its preparations for the Under-19 World Lacrosse Championships in Peterborough, Canada, as they have managed to gain funding from the Ministry of Sport in order to offset expenses for their debut in the competition.

Speaking with The Gleaner, President of the Jamaica Lacrosse Association, Calbert Hutchinson announced that the ministry has pledged $1m towards the team’s accommodation and meals during the tournament. The pledge from the ministry is the latest to join the girls’ efforts in getting to Canada along with BCIC, Wisynco Group, COK Credit Union, as well as Chung’s Caterers, who will be catering the team’s meals up until their departure.

Hutchinson stated that the association is close to its desired goal to fund the necessary expenses for the trip, but is still looking at partnering with more entities.

“I have to look back at the books to get a more accurate figure of the deficit because we have, with the new confirmation from the minister (of sport) and the additional donations since (this) week, we know that it was roughly US$48,000 ($6.5 million). I’m pretty sure that it’s down to about 20-something thousand US right now,” said Hutchinson.

Funding for the tournament has been realised mostly out of pocket, with those unable to source funds being assisted by the association in gaining sponsorship.

The team has been training at the Wolmer’s High School for Girls, under the direction of under-19 coach Alix Baldini. Karli Brentlinger, the head coach of NCAA Division One school Howard University, will arrive in the island today to assist Baldini. Brentlinger will be tasked with increasing the tempo of preparations as the tournament draws closer.

The quest to acquire the necessary resources for the team has been a challenging task not only for the association, but for the many parents of the players who have assisted in trying to acquire what supplies they can. Hutchinson is heartened, however, by the commitment and desire shown by the team in its preparations despite the difficulties encountered.

“It’s the spirit and the mood of the team that keeps me going, that keeps the team going. They are out in the boiling sun, scrimmaging, training, preparing themselves. They are high in spirits, confident, and they are working hard. And that’s what keeps us going,” said Hutchinson.

The president believes that the opportunity to represent Jamaica and the Caribbean at large is one that cannot be wasted as the sport continues to develop in the island, and has challenged corporate Jamaica to invest in the sport.

“Just getting (the) team there is going to be a huge success, not just for Jamaica, but for the wider Caribbean because we are going to be the first-ever Caribbean country to enter an under-19 female lacrosse team in the World Championships. Long-term success is going to be dependent on how lacrosse is seen in the eyes of corporate Jamaica. We cannot do this by ourselves. We need assistance from corporate Jamaica, who will benefit from Jamaicans doing well on the international scene,” implored Hutchinson.

Those who are still willing to contribute to the under-19 women’s lacrosse team are invited to donate using the verified GoFundMe Page: https://www.gofundme.com/send-the-jamaican-u19-women039s-team-to-worlds.