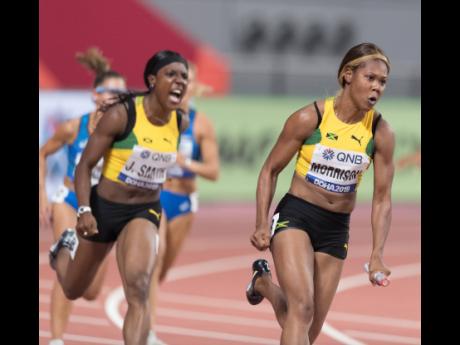 Gladstone Taylor
Jamaica’s Jonielle Smith (left) urges on teammate Natasha Morrison, who powers her way through the anchor leg of their women’s 4x100m relay heat, at the IAAF World Championships at the Khalifa International Stadium in Doha, Qatar, on Friday, October 4.

The Jamaica Athletics Administrative Association (JAAA) will be chasing races for the nation’s 4x100m teams before the Olympics in Tokyo next summer. That’s the assurance from the association’s President Warren Blake. Dr Blake said on Friday that the target meets include the Penn Relays in Philadelphia and two Diamond League meets in Europe.

In a review of Jamaica’s sprint relay performances at the recent IAAF World Championships in Doha, Qatar, Blake said, “What we’re planning to do is to see what opportunities we can get apart from having them train together, but also in terms of competition, there are some opportunities that are available for them to have competitive experience going into the Olympics.”

The intent comes after mixed results in Doha, where the women triumphed in a world-leading time of 41.44 seconds, but with the men eliminated in the first round.

“You have Penn Relays, where we usually send a team, where we are going to see if we can get some of the men who might make the team, get them to run that relay, so they will get practice doing baton changes and competition,” Blake said of the plans for the renowned relay carnival. Jamaica took the women’s race at Penn this year, with the men fielding two teams.

The women participated in the 4x100m at Diamond League meets in London and Zurich, and Blake hopes to get the men’s team in those meets in 2020.

“We have been invited in the past and we are going to see if we can activate those invitations for this year, especially the Muller Diamond League in London, and I think the Zurich one usually has a relay, so we’re going to try and get our teams in those,” he added.

With the 4x100m on the agenda at the IAAF World Relays and Pan American Games, the ladies got several chances to hone their baton passes, except for Doha anchor Shericka Jackson, who came in after the injury induced withdrawal of Olympic champion Elaine Thompson.

“The changes that our girls did were almost near perfect, and I think that helped us with not the prime team in the 4x100m for the women,” Blake explained. “A lot of people felt that we weren’t going to win the gold because the team was weakened by some of the top names not being there.”

The men were eliminated despite a season’s best 38.15 seconds. That would have qualified for every other World Championships final in history, but they were swept away by a record-breaking second semi-final where six nations ran under 38 seconds.