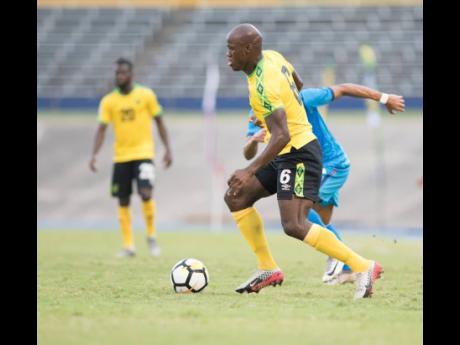 With promotion to League A of the Concacaf Nations League secured, Jamaica will look to finish their League B campaign undefeated when they face Guyana in their final Group C game at the Montego Bay Sports Complex tonight at 8 p.m.

The Reggae Boyz dispatched Antigua and Barbuda 2-0 on Friday through goals from Maalique Foster and Ricardo Morris to officially guarantee promotion and an automatic berth into the 2021 Gold Cup. They have an unassailable lead in the group with 15 points and a +20 goal difference.

Jamaica were hardly threatened in Friday’s game as they posted their fifth straight win of the Nations League, and finishing the group unbeaten will boost their chances of maintaining their top six place in the region, which would guarantee them passage to the final round of qualifying for the 2022 FIFA World Cup scheduled to begin next year.

The Theodore Whitmore-coached unit overpowered Guyana 4-0 in their last meeting in Lenora on September 9 through braces from Alvas Powell and Dever Orgill but will be cautious as Guyana will have something to play for with a Gold Cup qualifying place on the line.

The Marcio Maximo-coached ‘Golden Jaguars’ are in second place with nine points after their 4-2 win over Aruba on Friday. They have a +2 goal difference and only require a point to ensure a Gold Cup qualifying place. A defeat could still preserve their second place position, but they must hope that Antigua do not beat Aruba by a big enough margin in their game tonight to put their goal difference in jeopardy. Antigua are in third place with six points and a -10 goal difference.

Their only hope of going above Guyana would be a massive win and a substantial Guyana defeat in Montego Bay to turn the goal-differential tiebreaker in their favour.