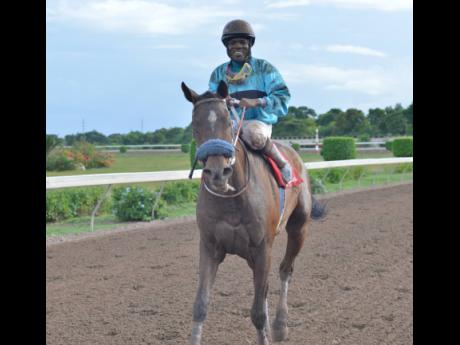 Kenyon Hemans
Dane Nelson is all smiles after winning aboard Princess Ava at Caymanas Park yesterday.

Nelson’s second five-timer, on his annual winter break from Canada, started with an opening double, back-to-back winners for Nunes, 1-2 favourites, out-of-class GOD OF LOVE and the best two-year-old filly seen so far, ABOVE AND BEYOND.

Nelson was handed another gift, this time at even-money, as United States-bred two-year-old, CRAFTY AND READY, made a mockery of weight conditions, which caused the foreigner to be alloted less weight than local-bred juveniles.

CRAFTY AND READY, beaten by another foreigner, SIR ALTON, in a fast 58.1, at five furlongs straight, last week Friday, won the six-furlong race for the Dye Job Sprint, by four lengths, in 1:11.4, even with Nelson riding four pounds overweight.

Late-closing PRINCESS AVA ran down a dour-looking SENTIENT, who sported bandages on all four, going by a half-furlong out to rush past the colt, winning by two and a half lengths for her second straight victory.

SENTIENT, fourth in the Diamond Mile and third in the Superstakes, had no kick up the lane after going through three furlongs out, taking over from PRINCESS AVA’s pace-setting stablemate, EARN YOUR STRIPES, who snapped a leg approaching the half-mile, and had to be put down on the track.

Nunes’ three-timer pushed him $7m clear of 18-time defending champion, Wayne DaCosta, whose lone winner was 10-1 outsider, PRINCESS ANNIE, partnered by apprentice Kiaman McGregor, who pushed the filly past rivals at the top of the straight, going a mile in the fourth.

Nelson closed his fist of winners with JUST TRICK ME, who made all at four furlongs straight in the eighth event.