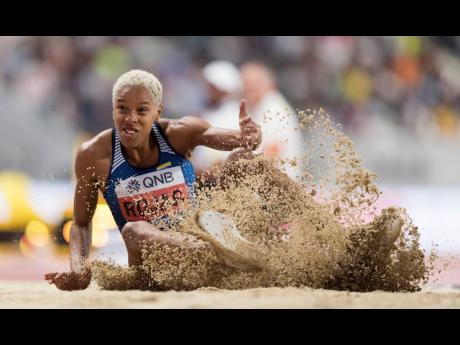 Yulimar Rojas of Venezuela is poised and ready to break the triple jump world record.

That’s the view of Kerry Lee Ricketts, who believes his wife Shanieka Ricketts might also reach the 24-year-old mark of 15.50 metres.

Rojas raised expectations last year with a monster foul at the Pan Am Games and with a brilliant jump taped at 15.41m just after the Diamond League final, and a 15.32m winner to beat Ricketts en route to a successful defence of her World Championship title.

“I definitely see the WR coming this year. I can foresee probably two athletes going over the world record, all being well,” the coach predicted.

Asked to pinpoint the jumpers who will mount the challenge, he smiled, “two athletes, two top triple jumpers, maybe the reigning DL champion and the reigning world champion.”

“To be honest, Rojas has had a fantastic year, two massive jumps, one at the World Championships, 15.32m to win, and one at a meet in Spain where she jumped 15.41m, the second biggest of all time. Take nothing away from her, she is poised and ready to go over the record,” he said admiringly.

He expects that continued work on technique will put his wife, who surprised Rojas with a last jump personal best of 14.93 metres at the Diamond League final prior to the Worlds, in position to challenge.

“So we just continue to work on that while maintaining everything else, so hopefully when she (Shanieka Ricketts) goes out and opens, in the latter part of the season, we shall see some real good jumps,” he reasoned with special reference to their ongoing focus on refining the final phase of her execution.

According to coach Ricketts, his wife won’t be the only Jamaican jumper who could be flying in 2020. He’s high on the chances of world jump champion Tajay Gayle to improve on his gold medal winning national record of 8.69 metres in 2020.

“Wow! The sky’s the limit”, Ricketts enthused. “He’s still young and he’s still learning the event so I won’t be surprised if I see him going somewhere close to 8.80m or somewhere like that,” Ricketts predicted for the 23 year-old, who broke the longstanding Jamaican standard of 8.62m held by world and Olympic runner-up James Beckford.

He sees improvements ahead for the Stephen Francis-coached University of Technology standout.

“He’s quick and I’ve heard his coach saying they’ll be working a lot more on speed and stuff like that so, trust me, I’m excited to see what can happen, but I think he could definitely go over 8.80m,” Ricketts said.