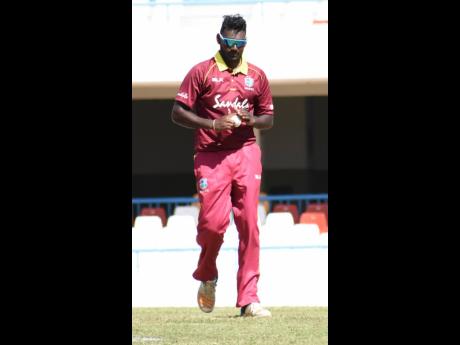 Captain Kimani Melius and Matthew Patrick struck half-centuries as Windies crushed hapless Nigeria by 246 runs to storm into the quarter-finals of the ICC Under-19 World Cup with an unbeaten record here yesterday.

Already with wins against powerhouses Australia and England under their belts, the 2016 champions flexed their muscle with both bat and ball to top Group B with six points and install themselves as one of the favourites for the title.

Choosing to bat first, Patrick top-scored with 68 from 70 balls, batting at number six, while opener Melius struck 65 from 81 deliveries to power the Caribbean side to 303 for eight off their 50 overs.

Number eight Joshua James rallied the lower order with an explosive 30-ball 43 while Kevlon Anderson got a start with 25 off 27 balls in the top order but failed to carry on.

Faced with a virtually impossible run chase, the African side capitulated meekly for 57 off 21 overs and four deliveries as fast bowler Jayden Seales wiped out the top order with a superb spell of four for 19 from six incisive overs.

Left-arm spinner Ashmead Nedd then sustained that pressure with three for 11 while Patrick completed an excellent all-round performance by picking up two for 16 with his off-breaks to earn Man-of-the-Match honours.

Windies were given a solid, if not spectacular start by Melius and Leonardo Julien, who put on 70 for the first wicket before Melius added a further 65 for the second wicket with Anderson.

Left-hander Julien batted slowly, striking just three fours in a 47-ball knock before missing a drive at a full-length delivery from seamer Abdulrahman Jimoh (2-56) and having his stumps shattered in the 17th over.

Melius looked in good touch, punching nine fours and a couple of sixes, but it was his dismissal that sparked somewhat of a Windies slide as five wickets tumbled for 64 runs.

In need of momentum at 199 for six in the 39th over, Windies were rescued by Patrick and James, who put on a rollicking 90 from 63 deliveries for the seventh wicket.

Patrick belted, half-dozen fours and two sixes while James blasted a couple of fours and three sixes before perishing in the final over.

Seales then wasted little time getting stuck into the Nigeria top order when he bowled Sulaimon Runsewe without scoring with the second ball of the innings, and then sent back his opening partner Elijah Olaleye, also without scoring, bowled in the third over with five runs on the board.

Number three Chukwuemeka Mba (five) and Isaac Danladi (seven) staged the best stand of the innings when they put on 18 for the third wicket, but once Seales removed both Mba and Boniface Oche (duck) in the space of three balls in the ninth over, the innings resumed its decline.

Jimoh top-scored with 17 but was one of the last four wickets to fall for seven runs in the space of 27 deliveries.

J Seales not out 1

Did not bat: R Simmonds

I Danladi lbw b Nedd 7

B Oche lbw b Seales 0

A Jimoh c James b Patrick 17

A Isesele lbw b Nedd 2

A Abolarin not out 0