They had to hear my voice 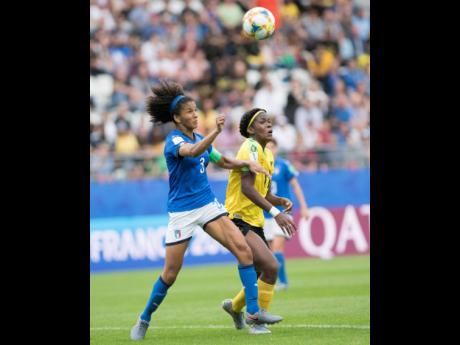 File
Khadija Shaw (right) of Jamaica and Italy's Sara Gama compete for possession of the ball in the Jamaica vs Italy fixture in the FIFA Women's World Cup 2019 at Stade Auguste-Delaune in Reims, France, on Friday June 14, 2019. Jamaica suffered a 5-0 loss at the hands of Italy.

National striker Khadija Shaw says it was important for her to be one of the main voices behind the Reggae Girlz's pay dispute with the Jamaica Football Federation (JFF) in 2019 to not only stand up for her teammates, but for the next generation of local players.

In an interview with The Players Podcast with the BBC, Shaw along with Reggae Girlz ambassador Cedella Marley discussed the resurrection of the senior women's programme, the team's historic qualification to the 2019 FIFA Women's World Cup and Shaw's experience playing in the French Division One Feminine with her club Bordeaux.

In the aftermath of Jamaica's World Cup campaign, the senior women's team in September 2019 protested the federation's failure to disperse monies owed to them for their participation in the tournament.

They threatened not to take the field for the Tokyo Olympic qualifiers that October if the matter was not resolved. Shaw disclosed that during the dispute, a number of JFF officials were surprised that she was among those leading the charge for the team to be compensated.

"One of the big issues that I had was that members of the federation were saying that they were surprised that I was one of the main ones who actually stood up and said stand for the team. And I'm like that's why I do it, because I have been through it and it's full time to see change," Shaw said. "I was like I've played U15, I've played U17 I've been through it all so there is nothing they can tell me that I haven't seen before."

While the team received what was owed to them, irreconcilable issues resulted in the resignation of former head coach Hue Menzies from the programme as well as his former assistant Lorne Donaldson in December 2019 and January 2020 respectively. Shaw said that it was important for her to take a stand so that the path may be easier for those who will come after them.

"I literally called the president and said you guys owe me an apology because to actually put in the papers and say there were surprised that I was one of the main ones who said no pay no play, it's not all about me," Shaw said. "It's for my team and for the younger ones to come up. If they don't see anything happen, then nothing will happen, but if they actually see people or players that they look up to want change, it's all about inspiring the younger ones."

"It's going to take some time for us to change the mindset of the people that are running the Jamaica Football Federation. I don't know if it's going to happen in my lifetime or Khadija's lifetime," Marley said. "I think it's going to get worse before it gets better because sometimes people just need to be exposed. It might be hurtful but nothing is going to change if people aren't exposed."

Shaw was recently ranked number 31 on ESPN FC's "The 50 Best Women's Players in the Game Right Now" above the United States' Alex Morgan, Megan Rapinoe and Brazil's Marta. She is currently the league's top scorer with 19 goals and has Bordeaux in third place, holding on to a Champions League qualifying spot.