‘I’ll be fearless and limitless’ 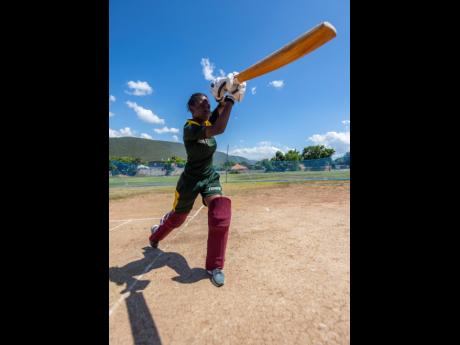 Jamaica Women’s opening batter Rashada Williams is over the moon as she has recently got the call to join 29 other players for a month-long West Indies Women’s high-performance training camp to be held in Antigua. The 24-year-old Spanish Town...

Jamaica Women’s opening batter Rashada Williams is over the moon as she has recently got the call to join 29 other players for a month-long West Indies Women’s high-performance training camp to be held in Antigua.

The 24-year-old Spanish Town native has been relishing the opportunity so much that she has been training on her own, as well as part time with assistant coach Robert Samuels, in anticipation of getting another senior call-up, having got a taste of international cricket on a tour with the West Indies team to Pakistan and Dubai in 2019.

The attacking right-hander is keen to make a greater impression on the coaching staff led by Courtney Walsh, having missed out on action during the series against Pakistan two years ago.

“When I got the call from the chief selector, I immediately assumed it was good news,” Williams said. “To know that I am back in the set-up, I just have to go with an open mind and know that there is no limit. I have to think limitlessly and try and learn more, grasp the opportunity, and become a better all-round player.”

Williams, who studies online at the Mico University College, where she is pursuing a physical education degree, says she is keen to balance her studies and try to make the West Indies team.

The part-time wicket-keeper says her main aim is to be part of the squad as the West Indies are to take part in the ICC Women’s World Cup qualifiers, which have been rescheduled for December.

The opening position has been a cause for concern for the West Indies team in recent times, and Williams is hoping that her performances throughout the camp can elevate her to cement a place in the final squad.

“For me, I have to knock on the door harder and kick it down if that is what it takes and prove myself to the coaches and the selectors and show them that I deserve to be there,” she said. “If there should be a touring team, that team should not leave without me.”

Along with Williams, eight other uncapped players have been named as part of the training camp. They include teenagers Zaida James, from St Lucia, and Jannillea Glasgow, from St Vincent and the Grenadines. James is a left-arm medium-pacer and, Glasgow is a right-arm medium pacer.

The camp will start on Sunday.