Look to She’s A Wonder in The Portmore 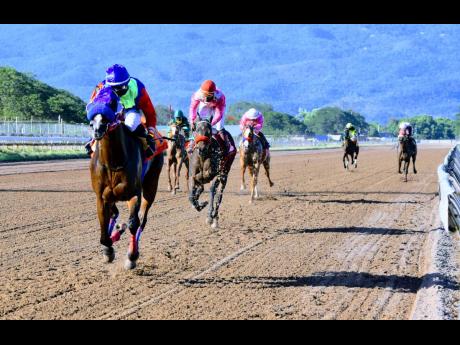 SHE’S A WONDER’s Thornbird Stakes win, an easy 10-length romp after being slowly into stride, makes tomorrow’s Portmore fillies-only event a spectator’s race, despite her allowing weight all around in the seven-and-a-half furlong event.

Runner-up ACTION ANN has more lengths to reverse than the nine-pound weight swing in her favour. Third-place SENSATIONAL ENDING was even farther behind SHE’S A WONDER at the end than she was turning for home, and fourth-past-the-post HOIST THE MAST has 14 lengths to make up for a nine-pound advantage, leaving her with five unaccounted lengths.

Having established herself as the most improved filly in training with a second-place run in last December’s Jamaica Two-Year-Old Stakes behind top colt FURTHER AND BEYOND, SHE’S A WONDER has stamped her class, first dismissing imported LURE OF LUCY in a fast-run five-furlong round sprint, 59.2, before annihilating her peers in the Thornbird Stakes.

HOIST THE MAST, the once-nemesis of SHE’S A WONDER, has been left behind by her rival. She tried matching strides in the Thornbird Stakes, but was left standing. HOIST THE MAST returns with a figure eight fitted but is only seven pounds lighter, hoping to reverse 14 lengths, a tall order.