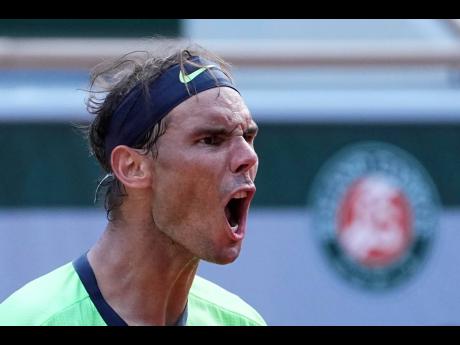 Rafael Nadal’s French Open set streak is over. His pursuit of a record-breaking 21st Grand Slam title – including 14 at Roland Garros – remains very much intact.

Nadal shrugged off dropping a set in Paris for the first time in two years and regained control yesterday, whipping violent forehands punctuated with first pumps and yells of “Vamos!” en route to a 6-3, 4-6, 6-4, 6-0 victory over 10th-seeded Diego Schwartzman to reach the semi-finals at the clay-court major tournament.

After he ceded the second set and trailed 4-3 in the third, Nadal said later matter-of-factly, “That was the moment to make it happen.”

As if wanting something were enough to will it into existence, he won the next nine games. How? Let him tell you.

“Not many mistakes,” Nadal said. “Hitting a lot of winners. Starting to hit the forehand down the line. Playing more angles. Playing longer with my forehand cross. Returning a little bit better. I mean, my serve, I think, started to work better.”

He is just two wins from eclipsing the men’s mark for most total Grand Slam singles championships that he currently shares with Roger Federer.

Nadal entered his quarter-final with a 35-set run at Roland Garros that began during the 2019 final. That grew to 36 before Schwartzman outplayed him for a stretch, surprisingly winning more of their exchanges that lasted at least nine strokes.