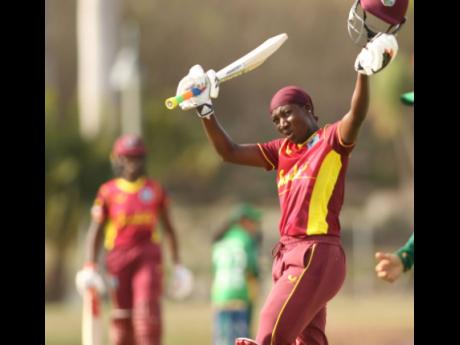 The 30-year-old jumped four spots to displace India stroke-maker Mithali Raj from the summit of the batting charts and rose two places in the all-rounders charts to knock Australian Ellyse Perry off her perch.

Taylor has also made moves in the bowling rankings, leaping three spots to 16th, with Australian Jess Jonassen holding on to the number one position.

The Jamaican has been in a rich vein of form in the ongoing five-match series against Pakistan Women, in which the hosts have already taken an unassailable 3-0 lead.

She struck an unbeaten 105 in the opening game, powering her side to a five-wicket victory after they easily chased down 206 at Coolidge Cricket Ground.

She did not bat in the second One-Day International (ODI) and was sidelined from the third, with Anisa Mohammed leading the squad in her absence.

There was also movement in the rankings for all-rounder Deandra Dottin who re-entered the batting charts at 28th, after featuring in her first ODI in two years last week.

She has also been installed at 47th in the all-rounders rankings.

Fast bowler Shamilia Connell, who has picked up just two wickets in the series, now lies 39th after rising four places in the bowling rankings.