‘I knew I’d get another opportunity’ 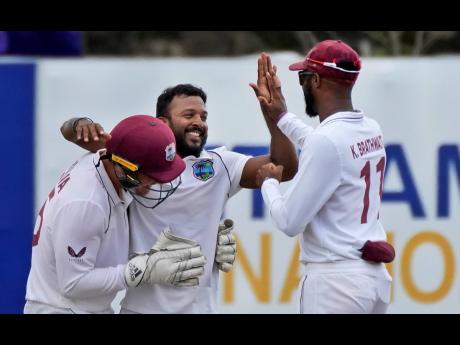 UNTIL YESTERDAY, it had been six years since VeersammyPermaul bowled a ball in Test cricket for the West Indies.

However, the little man from Berbice, Guyana, looked like he has not missed a beat following his career-best five-wicket haul against Sri Lanka on day two of the second Test.

On another rain-affected day, the left-arm spinner from Albion Cricket Club was the star performer, bagging five wickets for 35 runs to help restrict a prolific Sri Lanka batting line-up to just 204 runs.

The rain allowed just half of the day’s play and that allowed the visitors to dig in and seize the opportunity of picking up nine Sri Lankan wickets for just 91 runs, this after the home team had resumed the day on 113 for one wicket.

“I am very overwhelmed to get my first Test five-wicket haul. I think over the years I have been working hard to get back into the team and now it is paying off,” said Permaul.

The Guyanese used the conditions to perfection and he, along with Jomel Warrican, who picked up four wickets for 50 runs, gave the visiting side a fighting chance of squaring the series, after the Windies ended day two on 69 for one, still trailing by 135 runs.

For Permaul, his strong faith in God helped him to come up with a divine bowling performance.

With the Galle track known for spin, the left-arm spinner said he meticulously studied the surface and used his analysis well to get the best out of the track.

“I tried to adjust to the conditions. I tried to get what pace is good to bowl on this wicket. I was able to make that adjustment and have control and try to spin the ball as much as possible,” he analysed.

If history is to repeat itself, Permaul is in good stead to claim more wickets in this Test match. On three occasions in Tests, he has taken four wickets, with one in the first innings and three in the second innings. At that rate, a maiden 10-wicket haul could be on the cards, but the Guyanese is cautious.

He said: “Moving forward I think it is very important that we stay consistent as a bowling unit and be patient. We must not look for a wicket with every ball, but instead, try to create more opportunities and the wickets will come.”