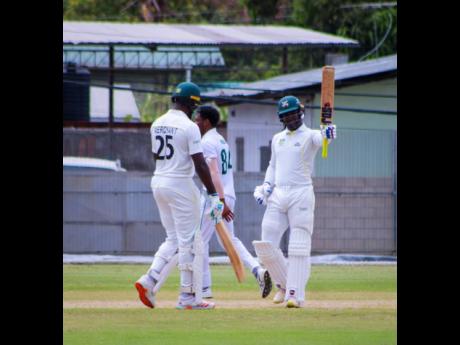 Brandon Corlette
Jamaica Scorpions wicket-keeper batsman Aldane Thomas raises his bat and acknowledges the applause from teammates after scoring a century against the Guyana Harpy Eagles.

Wicket-keeper batsman Aldane Thomas scored his first century at the regional level to help the Jamaica Scorpions pile up 393 runs against the Guyana Harpy Eagles at lunch on day two of their West Indies Championship match at the Diego Martin Sports Complex.

Thomas hit an even hundred off 101 balls with 16 fours and two sixes as the Scorpions added 111 in the pre-lunch session for the loss of four wickets. Jermaine Blackwood added just four runs to his overnight score of 110.

Jamie Merchant weighed in with a valuable 39 as he and Thomas put on 76 for the eighth wicket.

Left arm spinner Veerasammy Permaul was the pick of the bowlers for the Harpy Eagles with three for 96. Demetri Cameron, Kevin Sinclair and Gudakesh Motie took two wickets each.

At lunch, the Harpy Eagles were nine without loss, still trailing the Scorpions by 384 runs.

Over at the Queen's Park Oval, the Windward Islands Volcanoes were 66 for two at lunch, replying to the Leeward Hurricanes first innings score of 333 all out. Devon Smith made 35. Alick Athanaze and Kavem Hodge are nine and four not out respectively as the Hurricanes trail by 267 with eight wickets in hand.

Earlier, Colin Archibald was left not out on 106 as Volcanoes added 32 to their overnight score of 301. Daniel Doram was the last man out for 43 with Preston McSween claiming five wickets.

Over at the Brian Lara Cricket Academy, Barbados Pride were 166 for three at lunch, replying to Trinidad & Tobago Red Force score of 133. Raymon Reifer is not out on 56 and with him is Roston Chase on 27. Jonathan Carter made 41 against two wickets for Terrance Hinds as the Pride lead by 33 with seven wickets in hand.