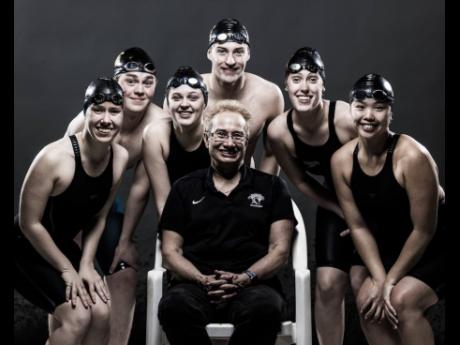 Contributed
A portrait of the University of Waterloo swim team’s graduates along with their coach, Jacky Beckford-Henriques (centre).

JAMAICA-BORN JACKY Beckford-Henriques, who recently copped the award for Imprint Coach of the Year for the quality job she did as swimming head coach with the University of Waterloo in Canada, believes there are actions Jamaica can take to improve its own performances in the pool.

“Educating of coaches in development of swimmers from age group to senior level, using resources such as past swimmers for coach education,” said Beckford-Henriques, when asked what could be done to improve Jamaica’s standing as a swimming nation.

“We have the likes of Dawn Chuck, Sion Brinn, Janelle Atkinson, who have all had successful coaching careers in the USA. Of course, I must mention Alia Atkinson, who, with a long, very successful career has a wealth of knowledge to give,” said Beckford-Henriques.

According to Beckford-Henriques, there also needs to be long-term fundraising and sponsorship for the national programme, but other structural improvements were also necessary, like building pools islandwide and implementing learn-to-swim programmes on a larger scale.

Looking back at her recent honour, Beckford-Henriques said it was always a great honour to be recognised by peers.

“I respect the work of the other coaches. So, to receive Coach of the Year was extremely pleasing,” she said.

Her efforts with the programme resulted in a silver medal for the men’s team at the Ontario University Athletics (OUA) Championship with 617 points and a fifth-place finish for the women’s swim team overall, an improvement from the Warriors’ performances two years ago, where the women finished in 15th place and the men ranked 11th place overall.

NOT AN EASY ROAD

It was not an easy road working with her team to take them to where they are today, the veteran coach said noting the challenges that came with the pandemic.

Thankfully, she said, throughout the pandemic, the athletics department at the university was extremely supportive of the varsity programmes and so, if there was a way they could train, they pushed for it to happen.

“Of course, there were periods of total lockdown and we had to resort to ‘Zoom dryland’, having online team meetings, etc. I do believe swimmers were affected, especially as the sport is known for its all-year daily training, feel of the water. So, to tell a swimmer they can’t do this was devastating for many,” said Beckford-Henriques.

Team support was high as she shared that the swimmers rallied around, staying in touch with each other to make sure everybody was okay.

Beckford-Henriques has maintained her passion for coaching over the years by using the swimmers she calls ‘fantastic individuals’ whom she coached over the years as motivation.

She said seeing the swimmers she coached making a positive contribution to society gives her a sense of joy.

Beckford-Henriques, who coached the national team in Jamaica from 1984 to 2016, said her experience on the island has shaped her into the coach that she is today.

“I had so many opportunities to work with talented young swimmers, developing them as age-group swimmers to competing at the senior level. I’ve had the chance to attend three Olympics, several World Championships, Commonwealth and Pan Am Games as a coach. These opportunities to be on the deck with world-class coaches who were willing to share their knowledge was instrumental in my development as a coach,” she said, acknowledging coaches such as Larry Shofe, Rick Bishop, Greg Troy, Guy Edson and Rob Emary from the United States, who offered her their guidance. That, she said, now allows her to be coaching senior-level swimmers.

Quizzed on whether she would ever return to coaching in Jamaica, Beckford-Henriques said that she has never really stopped.

She pointed to the instances where she has brought McMaster University and University of Waterloo teams to Jamaica for training camps, and is always inviting local swimmers to join them for those camps.

She said she also works with Jamaican swimmers when she is on the island on personal visits.