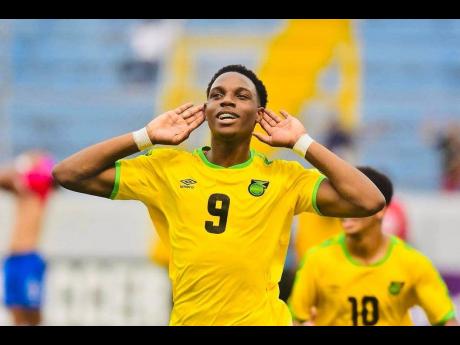 Jahmari Clarke has continued to score for the Young Reggae Boyz in their bid to qualify for the World Cup via the Concacaf Under 20 Championship, with his side now through to the quarterfinals.

Clarke scored his third goal of the campaign, opening the scoring in the fourth minute, before Steevenson Jeudy equalised in the 50th. Later, Tarick Ximines would restore the one-goal lead with his 84th-minute effort.

With the game just four minutes old, Jamaica had a throw-in that didn’t seem dangerous. That was until Ximines threw the ball deep into the 18-yard box.

Haiti’s goalkeeper, Willemson Augustin came to collect the throw-in but found his path blocked by Clarke and a challenging defender. The delivery bobbled off the head of Clarke and spilled in front of goal. The striker was the first to react and Jamaica were in the driver’s seat.

But Haiti have been dangerous all tournament and continued to be so.

In the 50th minute, a pass down the right side left Watz Leezard isolated with Jamaica’s Romain Blake. It didn’t end well.

Lizaard went one way and then another, leaving Blake frozen before delivering a perfect cross to the back post for Jeudy to head home.

Jamaica pressed to regain their advantage, and in the 71st minute, Christopher Pearson’s curling right-footed effort was expertly parried by Augustin, maybe making up for the mistake that cost the first goal.

But there would be further disaster for the goalkeeper after he came to collect a Christopher Pearson cross but fumbled the effort.

The delivery ricocheted on to the head of Cole, but his reaction wasn’t good enough to head home, the tame effort falling free for Ximines to react quickest at the back post.

Ximines’ toe poke put the Jamaicans into the quarterfinals.

While Jamaica’s opponents are not yet known, at press time, Costa Rica, courtesy of a 4-1 win over Trinidad and Tobago; Panama after their 1-0 win over Cuba; Honduras after a dominant 4-1 performance against Curaçao; the United States, after a 5-0 victory over Nicaragua; and Guatemala after a 4-3 penalty shoot-out win over Canada have advanced.

Costa Rica, Panama, Honduras, United States, Guatemala, and Jamaica will be joined in the quarterfinal by either El Salvador or Dominica, who were playing at press time, and the winners of a clash between Mexico and Puerto Rico.