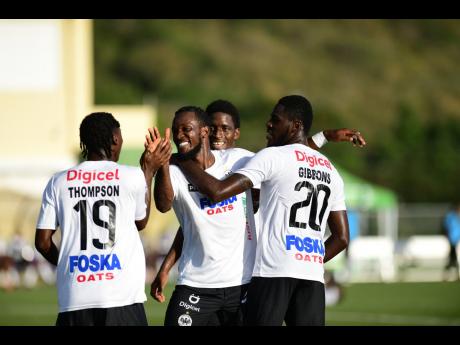 IF THERE is a way that defending champions should go out of a competition, Cavalier SC likely provided an example of that on Wednesday when they attempted to make their second final in a row against Dunbeholden.

Days after the Jamaica Premier League (JPL) second-leg semi-final, local football fans were still waxing lyrical about the electrifying last-four contest at Sabina Park, with many calling it the best game they have seen in the league.

Both coaches had promised attacking football, and were true to their word but nothing prepared fans for the intense drama that would follow.

“This game was hot,” one fan commented on the JPL Instagram page.

“‘Stress mi rite out,” lamented a Cavalier fan, while one fan suggested that “not even the final will be that nice”.

Coming into the second leg trailing 1-0, Cavalier found themselves further behind after 17 minutes through a brilliant Kimoni Bailey strike. Bailey combined with Shaken Powell before curling a shot off his weaker right foot past Vino Barclett in goal.

At that stage things looked extremely bleak for Cavalier until Dwayne Atkinson gave them a lifeline with a superb curling strike of his own.

However, Dunbeholden restored their advantage 11 minutes after the interval when Atapharoy Bygrave produced another beautiful goal to give the St Catherine team a 2-1 advantage.

But Cavalier, summoning the spirit of champions, hit back with a tremendous volley from Kimani Gibbon four minutes later.

The Rudolph Speid-coached team then seized a 3-2 lead, levelling the tie 3-3 on aggregate when Ronaldo Webster turned home Gibson’s cross after a slick build-up from the 2021 champions.

However, the drama did not end there. Two minutes into extra time, Bygrave chased a ball played over the top and slammed a shot past Barclett to make the game 3-3.

But Richard King responded two minutes later with another impressive curling strike off the left boot to make it 4-3 and 4-4 on aggregate, sending the game to penalties

However, Cavalier who had won their previous two shoot-outs, including the 2021 final against Waterhouse, could not hold their nerve this time around and Dunbeholden triumphed 4-2 to advance.

However, for many football observers, there was no loser in that game, with both sets of fans in the jam-packed Sabina Park standing for the entire 120 minutes.

In 2022, Cavalier and Dunbeholden have created a classic that will be talked about long into the future.