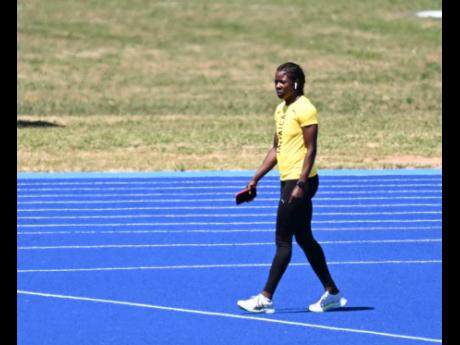 AFTER THE mistake that led to her elimination from the 200 metres at the Tokyo Olympics, World Championships 100m silver medallist Shericka Jackson was adamant that it could not be repeated.

Now she has the chance at a maiden global title at the 2022 World Athletic Championships in the 200m final tonight at 9:50 p.m. Jamaica time, thanks to better curve running and a better mindset.

Jackson said the experience of easing up early and finishing fourth in her first-round heat at the Tokyo Games was the wake-up call she needed to attack Tuesday’s semi-final with better precision, clocking 21.67 seconds, the fastest time in the field.

“I had probably one of the fastest 200m times last year, and not to advance from the heats was a real heartbreaking moment for me, and I wanted to make no mistakes. We worked out some things. The curve was one of the problems. So I wanted to run the curve as hard as possible, and I did that,” Jackson said.

Attacking the curve has been a focus for Jackson this season, who has the fastest time in the world this year, 21.55 seconds, which she set to win the national championship in June.

Jackson had said her win at the Diamond League last May in Rome, where she beat double sprint Olympic champion Elaine Thompson Herah in 21.91, helped solidify some things for her.

Coach Stephen Francis says the continuous work on the technique has made a difference, especially after her mishap in Tokyo.

“She has been told in the past, if you are going to take it easy in the race, you better make sure that you run the first part of the race hard, and then you can do whatever. And I think she realised that if she had run a hard turn [in Tokyo], she wouldn’t have been in the problem that she ended up being in, missing out on a medal, possibly winning the race,” Francis said.

“It appears there has been some work to focus on her mentality in trying to get over her high-school practice, thinking that the curve is not so important. It appears that finally that has been settled in her mind, and suddenly what you see is a result of that change.”

It is a change that has her on the verge of winning her first title. However, Francis is not thinking about the chances of the world record, 21.34, set by American Florence Griffth Joyner, being broken.

“At the US trials, there were several people who you wouldn’t have thought would have run sub-22 that ran sub-22. But the important thing for any athlete is to get to the final; and then once in the final, to get the highest place that they can,” Francis said.

Another Jamaican sweep could be on the cards with five-time 100m champion Shelly-Ann Fraser-Pryce and Thompson Herah in the field.