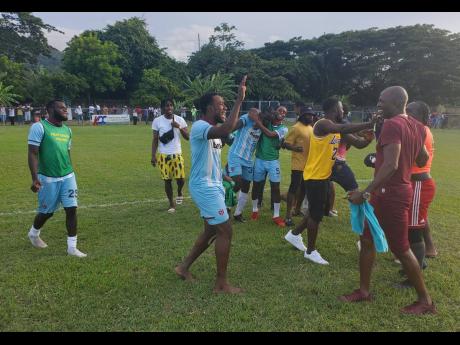 Kavarly Arnold
Members of the Faulkland FC team celebrate after gaining promotion to the Jamaica Premier League following their win over Falmouth United in the semi-finals of the Jamaica Football Federation Tier Two competition at Drax Hall on Sunday, July 24.

After securing qualification to the Jamaica Premier League (JPL), Faulkland FC are now seeking sponsors as they prepare for their debut season in the island’s top football competition.

The St James-based club earned promotion to the JPL through the recently concluded Jamaica Football Federation (JFF) Tier Two competition, along with Chapelton Maroons FC, who they beat in the final to lift the title.

Outgoing coach of Faulkland Gregory Palmer, who has been at the helm since their inception in 2012 and who is also an executive member of the club, told The Gleaner recently that he believes that if the club is to do well, acquiring sponsorship must be front and centre of their agenda.

Palmer has signalled his intention to step down as coach of the team for next season for personal reasons.

“Looking ahead to the Premier League, the main thing that we want to secure is sponsorship, and everything else will fall in after. Our main sponsors, First Choice Finance and Gordon Plus Hardware have done a great job so far, and I must thank them, but the Premier League is a big step. Such a big step will take a lot of backing,” said Palmer.

Dalton Reid, president of Faulkland, said they are still in the initial stages of talking with prospective sponsors three weeks after gaining promotion to the JPL.

“We knew that once we make it to the Premier League it is going to cost a lot of money and will need some sponsorship. However, we are still in the initial stages with sponsorship and getting them on board,” Reid said.

When asked about an update on Palmer’s decision to step down ahead of the Premier League, Reid noted that they have not yet met as a board.

“We haven’t all met as a board, but Palmer and I have had discussions. Maybe in the coming weeks we will be clear on things, including sponsorship,” he said.