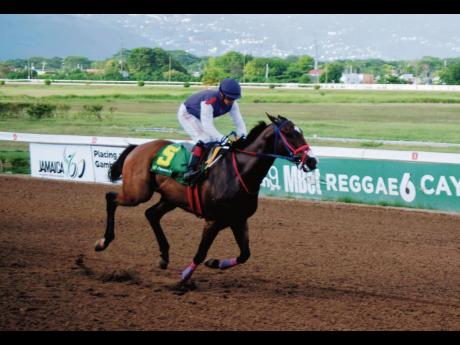 JORDON REIGN’S outmuscled CURLIN’S AFFAIR and his own stablemate, SHE’S A WONDER, to seal a hat-trick of wins, notching a two-and-a-quarter length victory in yesterday’s Reggae Trophy at five furlongs straight.

United States-bred JORDON REIGN’S improved his season tally to four victories in five outings, the only blot being an April 3 loss at five furlongs straight in which he had bled, reporting off a near three-month lay-up.

Razor sharp after back-to-back wins against fellow importee LURE OF LUCY, JORDON REIGN’S disputed the lead with CURLIN’S AFFAIR and SHE’S A WONDER before taking charge entering the main track.

The powerful American stayed on strongly inside the last furlong, clocking 59.4 in the graded stakes/open allowance event, though eased close to home by Dick Cardenas.

CURLIN’S AFFAIR kept second by a half-length from SHE’S A WONDER, who was run off her legs but did well with near-topweight 121lb under leading rider Dane Dawkins, who booted home a four-timer on the 10-race card.

Dawkins moved five winners clear of champion Anthony Thomas in their battle atop the jockeys’ standings, 65-60, with his four-timer started by ANGELLOS in the second event followed by a hat-trick of winners – FRESH CASH, CITY COUNSEL and CHARMIN BEAUTY – races four through six.

Thomas rode two winners, SHE’S MY DESTINY and FEARLESS FIRE, making all in back-to-back races, the seventh and eighth, after Dawkins dominated the first half of the programme.

Racing continues at the weekend with Saturday-Sunday meets.