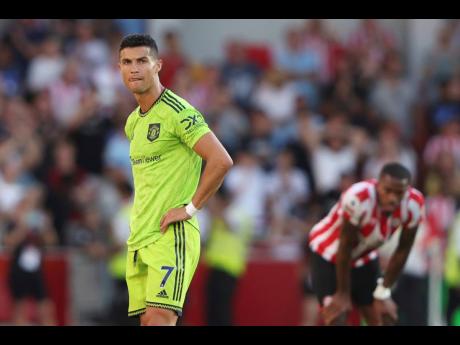 AP
Manchester United’s Cristiano Ronaldo looks around after the end of the English Premier League soccer match between Brentford and Manchester United at the Gtech Community Stadium in London yesterday.

TEMPERATURES SOARED in England on Saturday and no one was feeling the heat more than Manchester United’s latest manager, Erik ten Hag.

On another humiliating day for a massive club in free fall, United conceded four goals in the first 35 minutes and were swept aside in a 4-0 loss at Brentford in the Premier League.

It’s two matches, two losses so far for ten Hag, the Dutchman who arrived from Ajax in a bold off-season appointment as United’s fifth manager in nine years and looked shell-shocked in the dugout as the goals poured in at Brentford Community Stadium.

It was understandable, too. United had never gone into half-time of a Premier League match trailing 4-0. Never before in the Premier League had United conceded so many goals, so quickly.

There were so many individual mistakes – goalkeeper David de Gea let a weak shot dribble underneath him for the first goal, Christian Eriksen was tackled inside his own box prior to the second, and Brentford had two free headers at a corner for the third – that ten Hag probably wanted to change most of his team at half-time.

He made three half-time substitutions, with Cristiano Ronaldo – back in United’s team after an off season when he pushed to leave the club – staying on and playing the full match. He wore a frustrated look throughout.

“What I asked them to do was play with belief and take responsibility for their performance,” ten Hag said. “That is what they didn’t do.”

Josh Dasilva, Mathias Jensen, Ben Mee and Bryan Mbeumo were the scorers for Brentford, which pressed relentlessly and blew United away.

“It felt like we were on top of everything,” Jensen said. “They couldn’t cope with our pressure, our second balls, our intensity. You could see they were struggling.”

It might get even worse for ten Hag and his new team, which opened with a 2-1 home loss to Brighton last weekend. Up next? It’s only fierce rival Liverpool, which will be eager to hand United a fifth straight loss stretching back to last season.

“We are, as a team, in a difficult process,” ten Hag said. “Of course, you expect a different start. It is not what we expected ... . It seems like what happened in the past, last season, we bring into the new season. We have to change that really quickly.”

United’s meltdown came in the last of Saturday’s seven games that were played in sweltering conditions that reached as high as 35 degrees Celsius (95 Fahrenheit).

Manchester City and Arsenal both scored four goals in home wins and continue to set a hot early-season pace.