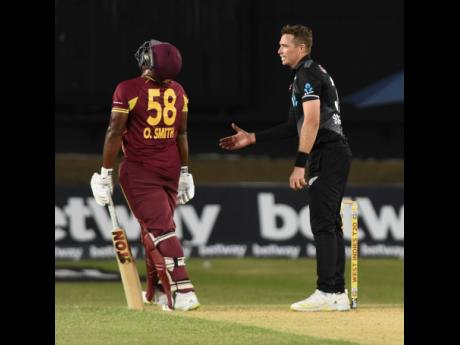 Ian Allen
West Indies all rounder Odean Smith (left) raises his eyes to the heavens after the West Indies lose the first T20 International of three against New Zealand at Sabina Park on Wednesday. Looking for a handshake is New Zealand pacer Tim Southee.

WEST INDIES white-ball captain Nicholas Pooran said his side was trying to have faith in their internal processes and hope that it will be enough to help them turn a string of depressing losses around.

Beleaguered West Indies produced yet another comical batting display on Friday at Sabina Park and slumped to a discouraging 90-run defeat in the second Twenty20 International against New Zealand.

West Indies trail 0-2 in the three-match series, which ends today at the same ground, where they also lost the first T20I last Wednesday by 13 runs.

“We know we are a young group. A new group as well. A lot of things we are learning as a group, and we are trying to understand how to play the game the right way, and trying to get that momentum.

“Winning and losing is contagious, and at the moment, we are losing. There are cricket games that we should win, and we are losing.

“As a group, we are happy with the progress that we are making, but obviously it’s difficult, and it’s frustrating to see us lose games. Everybody wants us to win games. We are trying to believe in our process and have patience.”

West Indies have now lost four consecutive T20Is and their 10th in 17 this year, hardly proof that their internal processes are working, but Pooran remained positive, and he said all was not lost with the ICC T20 World Cup in October to November in Australia looming.

“We have had three or four series now, and we have a good idea about who we want to go to the World Cup,” he said.

“We have used about 16 guys and everybody has an opportunity to showcase that talent and cement their spot.

“Australia won the (previous) T20 World Cup and they lost the series leading up to the World Cup. For us, we are trying to get it right. We know it’s not a perfect team yet, and obviously we see it in our batting line-up, where we are trying to get players in certain positions to play a role.

“It’s a new group, and we need guys to understand their roles. T20 is a game of consistency. It’s difficult to come on and switch on, and win games.”

Pooran admitted one of the critical missing links in his side’s weak performances with the bat is that he has not scored many runs, and he will continue to motivate himself to step up to the crease and change that starting today.